This is the first cake I ever learned to bake. It has a rich banana flavour, and is a firm favourite in our household. The recipe came from my Nana’s neighbour, Mrs Mac, who showed me how to make this in her kitchen and then let me proudly take the results home with me.  I honestly don’t know what the ‘Mac’ was short for, but her first name was Norma. She had wanted children but they hadn’t been able to have any of their own, and she doted on us when we came to visit my Nana and Pa.

Mrs Mac had been a cook in the army, which was how she’d met her husband, known by all and sundry as ‘Mac’. Mr Mac, (we could never quite bring ourselves to call a grown-up by their first name), an English Merchant Marine working with the Australian Navy, was taken prisoner by the Japanese when his ship was sunk in Singapore in World War Two. He ended up as a prisoner-of-war in Changi Prison.

When he finally came home to Australia he weighed so little that Mrs Mac could pick him up under one arm, so she told us. He’d lost most of his teeth and was very ill for many years, so she used to make this banana cake a lot because it was moist and easy to eat, and one of the few things he would actually ask for.

Mr Mac remained whippet thin; a stooped grey-haired old man by the time I knew him, who chain smoked endlessly, raced pigeons and would let me see his many tattoos, done during his time in Changi.  My favourite was a hula lady on his arm – he could make her hips wiggle by squeezing his bicep.

I still call this cake Mrs Mac’s Banana Cake. The secret ingredient in this cake is love, so don’t forget to add some of your own!

Preheat your oven to 180C (moderate or 355F), and line a loaf tin with non-stick paper, or grease and flour it well.

Mash the peeled bananas in a bowl with the vanilla.  Dump this into the butter mixture and use the beaters to combine well.  The mixture may look as if it is curdling or separating – don’t panic! It will still be fine.

Sift the flours and bicarbonate of soda into the bowl with the banana and butter mixture and use a spoon to gently combine.  Do not beat, just fold through.

Spoon the batter into your cake tin. (Note – this also makes outstanding muffins, especially if you add choc chips!)

Bake for 45 minutes, or until the top springs back lightly when pressed.

Cool in the tin.

This cake is delicious on its own, or you can brush the top of the hot cake with a little butter and sprinkle some cinnamon and sugar over it.

If you want to be fancy the banana cake can also be iced.

Beat 4 ounces of butter (1 stick or 115 grams) until soft and creamy.  Gradually add 1 and a half cups of icing sugar (confectioners or powdered sugar), adding a tablespoon or so of milk to get a smooth consistency. Spread over cake.

Add a teaspoon of coffee, or a dash of maple syrup (both together are sensational).  Lemon juice instead of milk gives a zesty tang. A teaspoon or so of cocoa powder is also heavenly.

Hi! I'm Nicole Cody. I am a writer, psychic, metaphysical teacher and organic farmer. I love to read, cook, walk on the beach, dance in the rain and grow things. Sometimes, to entertain my cows, I dance in my gumboots. Gumboot dancing is very under-rated.
Posts created 2726 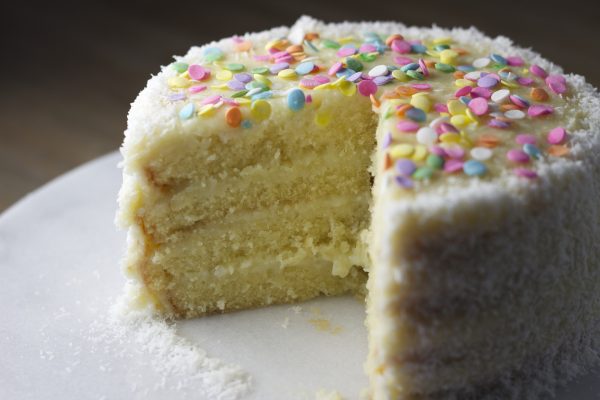