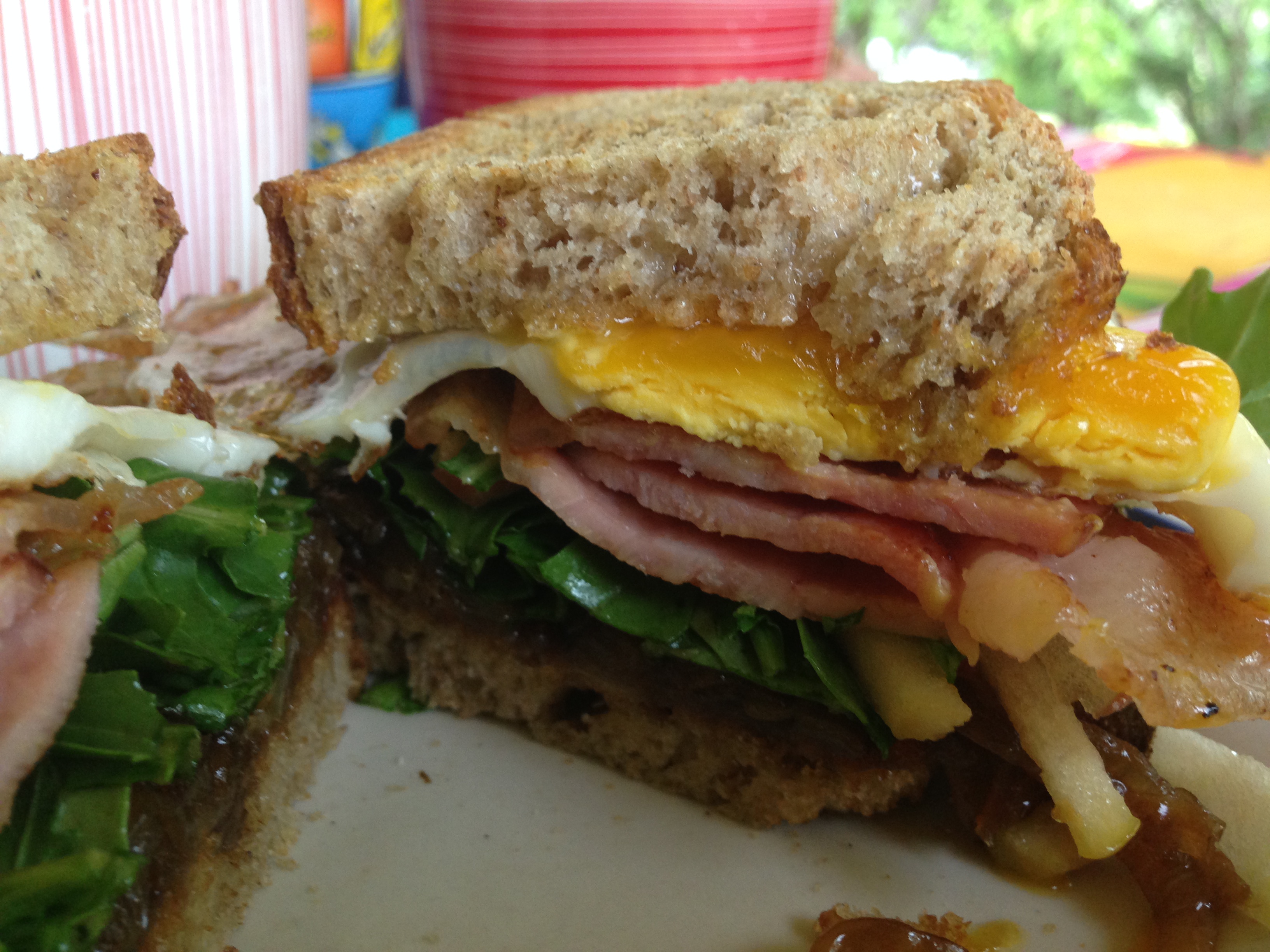 “When you wake up in the morning, Pooh,” said Piglet at last, “what’s the first thing you say to yourself?”

“What’s for breakfast?” said Pooh. “What do you say, Piglet?”

I have workmen to feed again today at the farm. This is a tasty, easy and rustic meal that can be eaten for breakfast, lunch or dinner with equally good results. Served up with a big pot of coffee or tea and a slab or two of my boiled fruitcake, the hungriest stomach can be made content.

What makes this sandwich extra good is using fresh, seasonal local produce. I source all of my ingredients from the local farmers markets or my back yard. Fresh artisan bread, organic free-range eggs and bacon lift this from tasty to sublime.

The caramelised onion takes a little time to make, but is well worth the little extra effort, and it can be made in advance so that you always have some on hand. This sandwich is fancy enough that I have often served it for breakfast at Christmas and New Year. At Christmas time you can substitute Christmas ham for the bacon. 🙂

Note: If you have non-bacon eaters, swap the bacon out for grilled haloumi cheese or some grilled sweet red capsicum (bell pepper).

3 large brown onions, 2 tablespoons of olive oil, 1 tablespoon of balsamic vinegar, 1 to 2 tablespoons soft brown sugar, salt and pepper. – This will cook down to about one large cup’s worth of caramelised onion, which would give me a hearty filling for three to four sandwiches.

Peel and halve the onions and slice. Don’t make them too thin. Place a heavy bottomed frypan over low heat with the oil, add the onions and sprinkle with a little salt. Leave on low heat, stirring occasionally for about twenty minutes or until the onions are soft have begun to turn golden.

Now add the balsamic vinegar, sugar and a grind or two or pepper. Continue to cook over low heat for a further ten minutes until the onions are sticky and caramelised.

Set aside to cool. Any leftovers can be stored in a covered container in the fridge for up to two months. 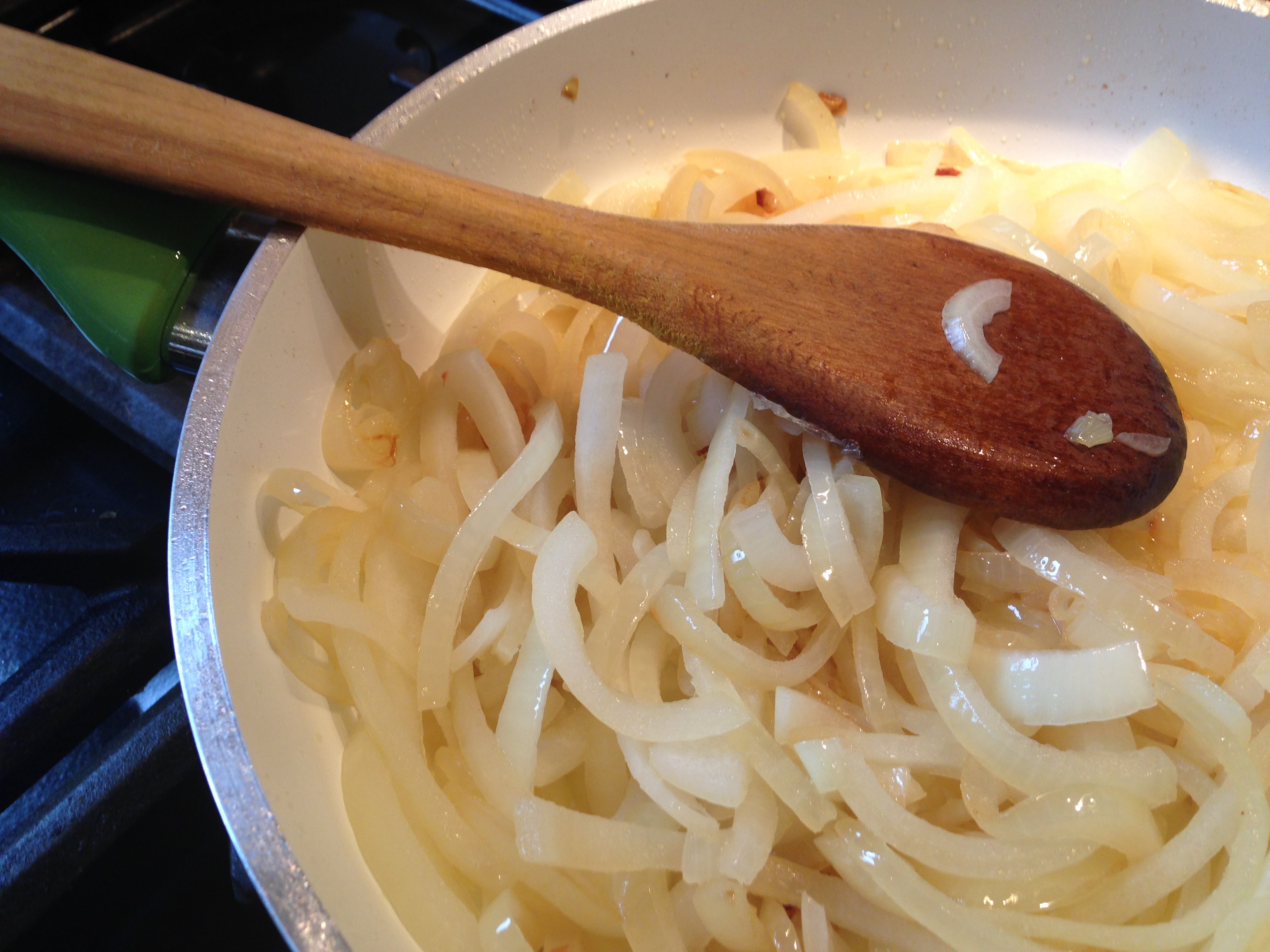 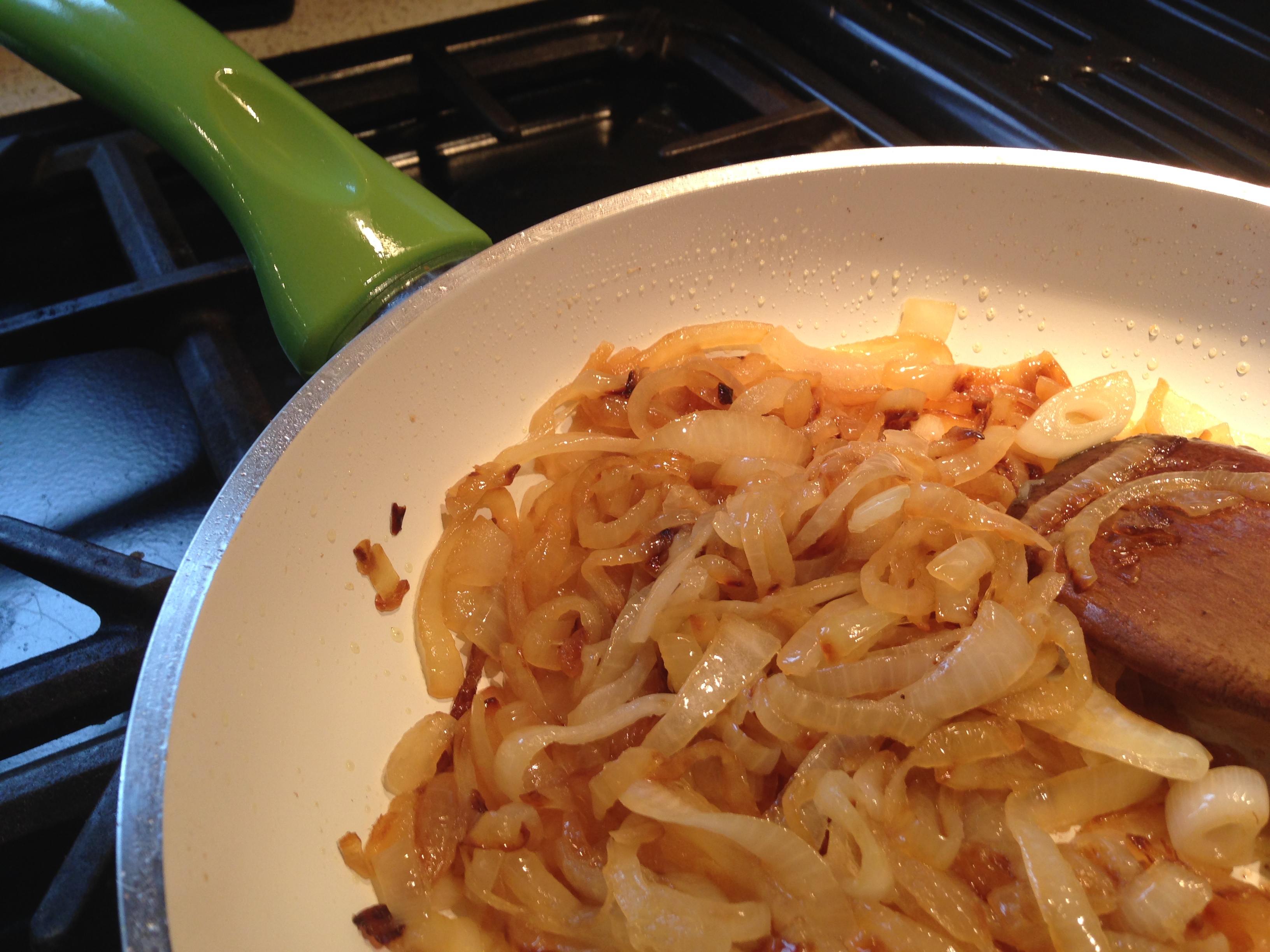 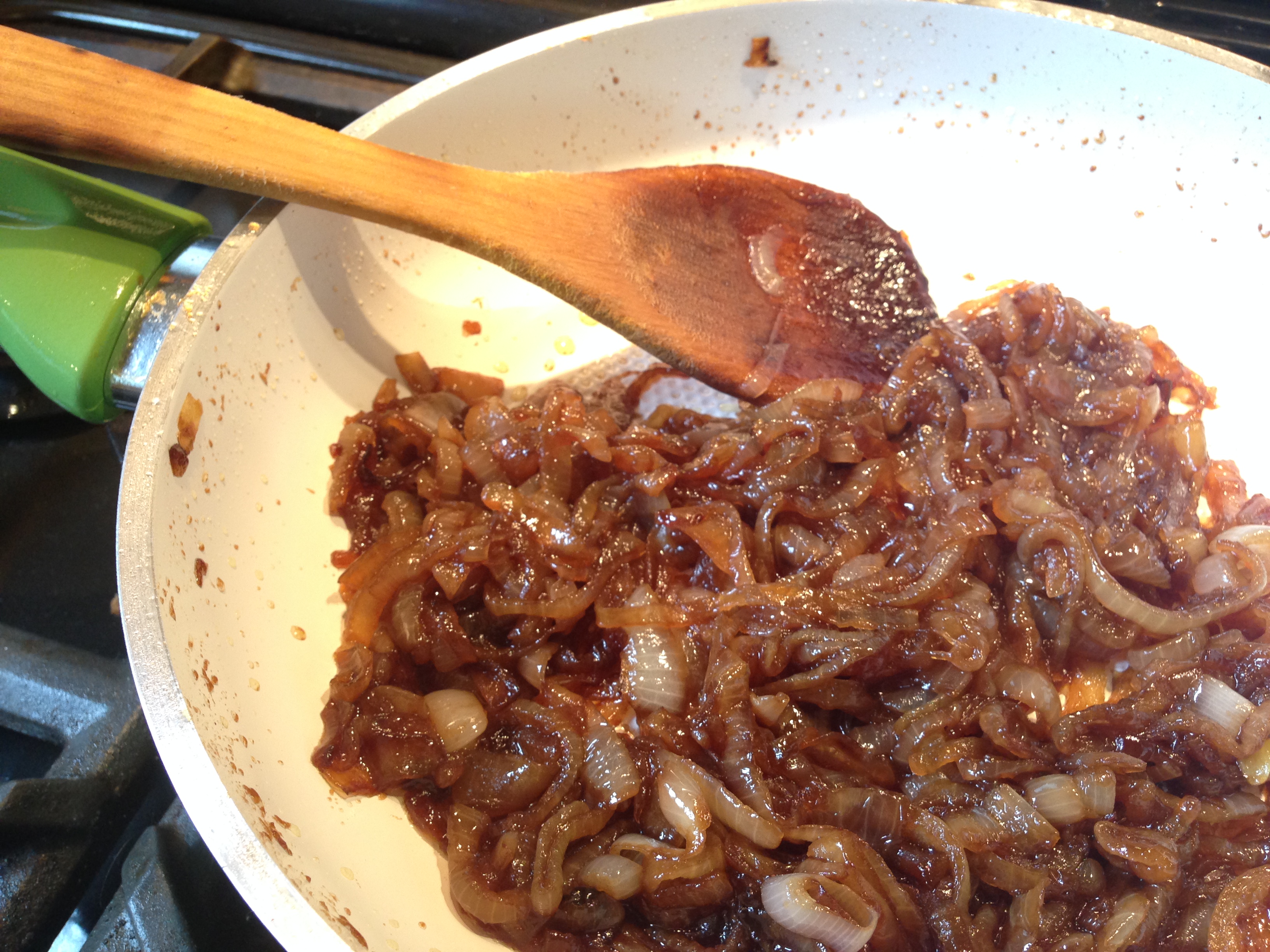 Two pieces of a good sourdough bread (I used a Sourdough Light Rye) or get super fancy and use half a baguette or a charming bread roll, enough bacon to generously fill each sandwich, one fresh egg, a handful of rocket leaves (arugula), and a slice of crispy apple. A generous portion of caramelised onion, a dash of olive oil, salt and pepper.

Put your frypan on over medium heat, add a slug of oil and when the pan is hot add your bacon slices. Cook until golden but still soft. Super crispy bacon isn’t great for sandwiches. Set the bacon aside on some paper towel or in a warm oven until you need it.

While the bacon is cooking, finely cut some fresh apple into matchsticks. I used half a large Pink Lady Apple for four sandwiches. Toss the apple and rocket together, ready for your sandwich assembly.

Turn the heat down a little and add the eggs in on top of the bacon fat. You can cook them sunny side up, or however you like them. I always like to leave my yolks a little on the soft side.

Get your bread ready. I toasted mine, which is not essential, but gives the sandwich a little extra yummy crunch.

Place a generous layer of caramelised onion on one slice of bread. 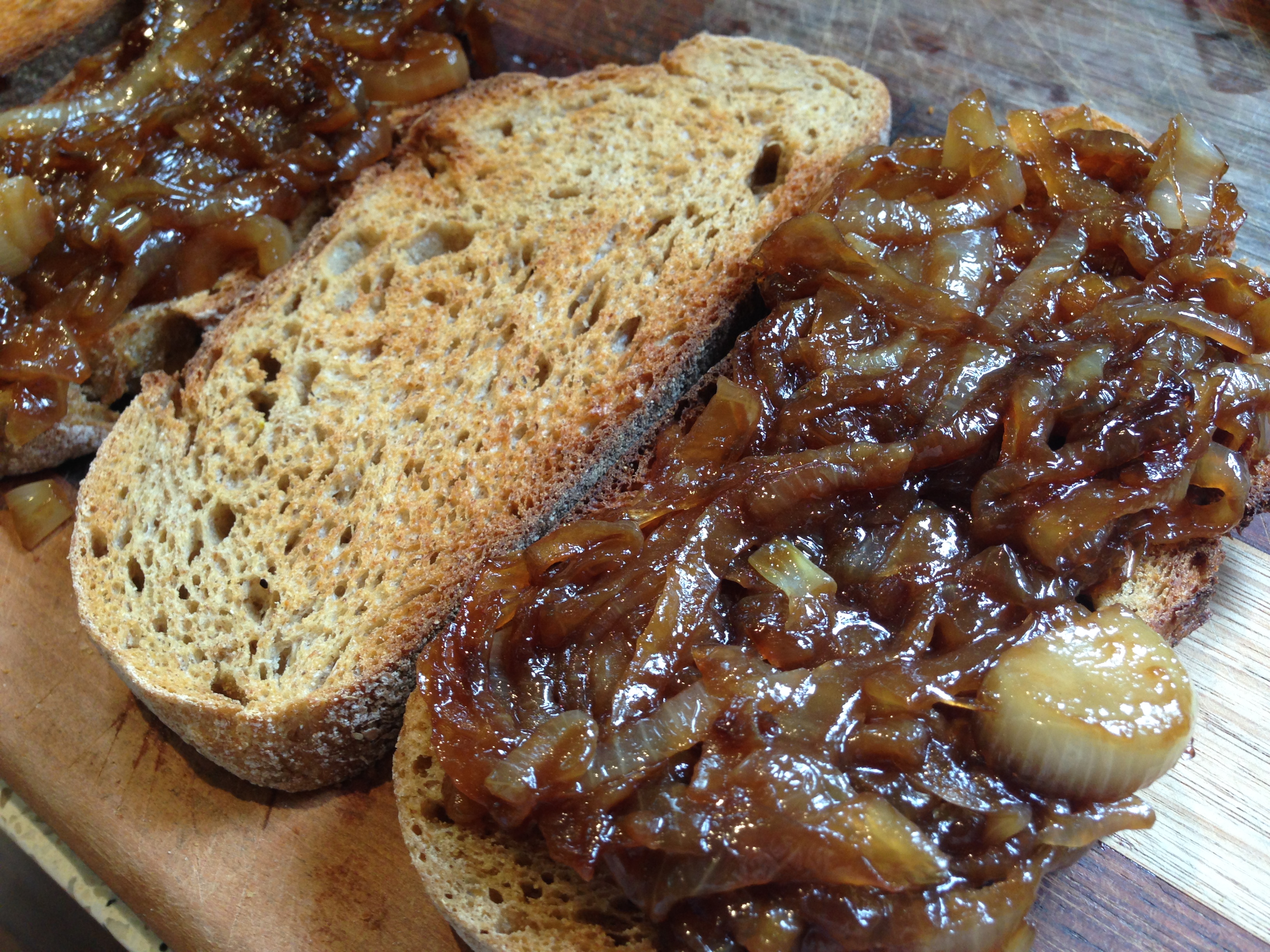 Then heap some rocket and apple on. I know that using apple may sound weird but trust me, it’s amazing! 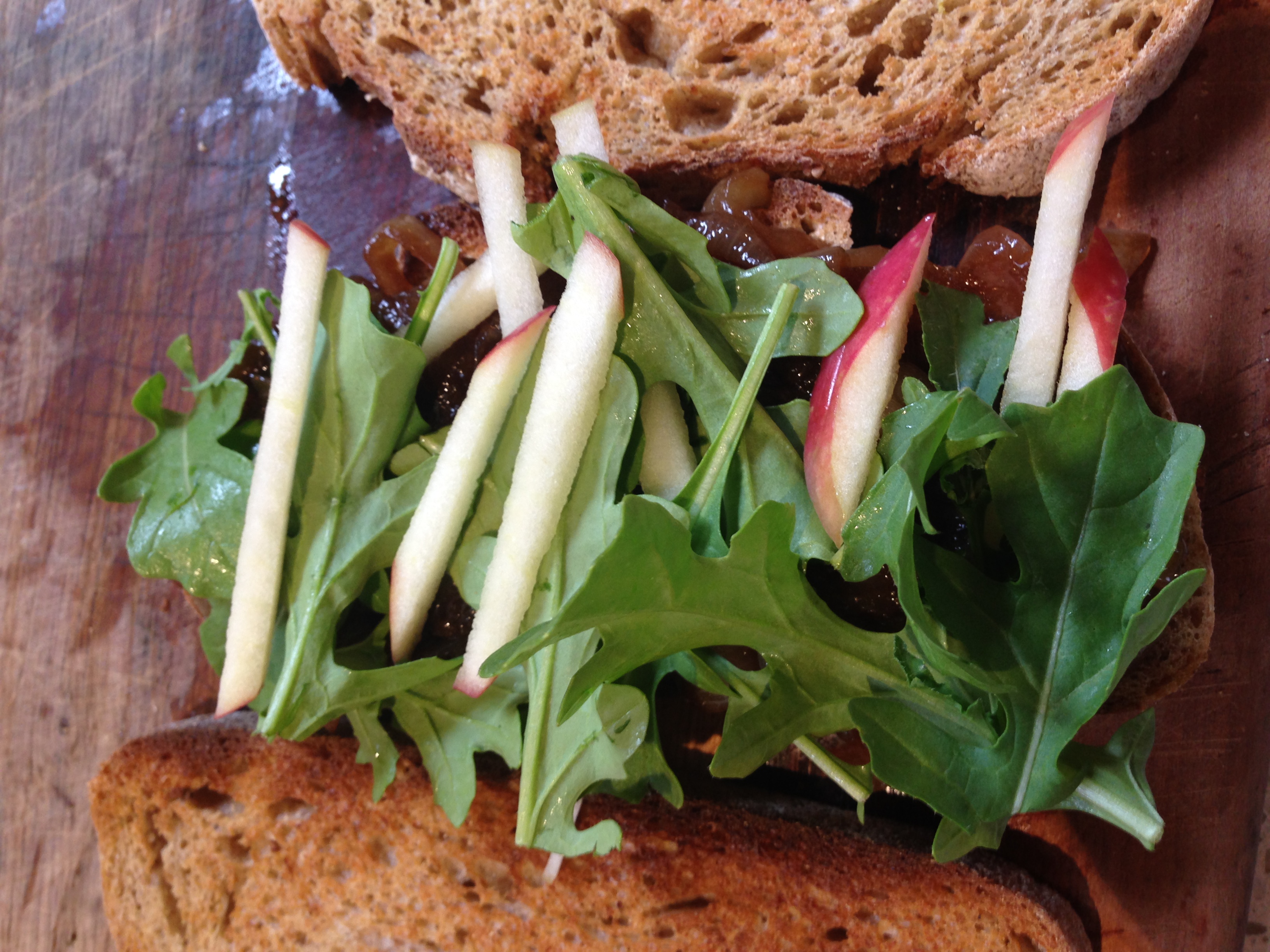 On goes the bacon. 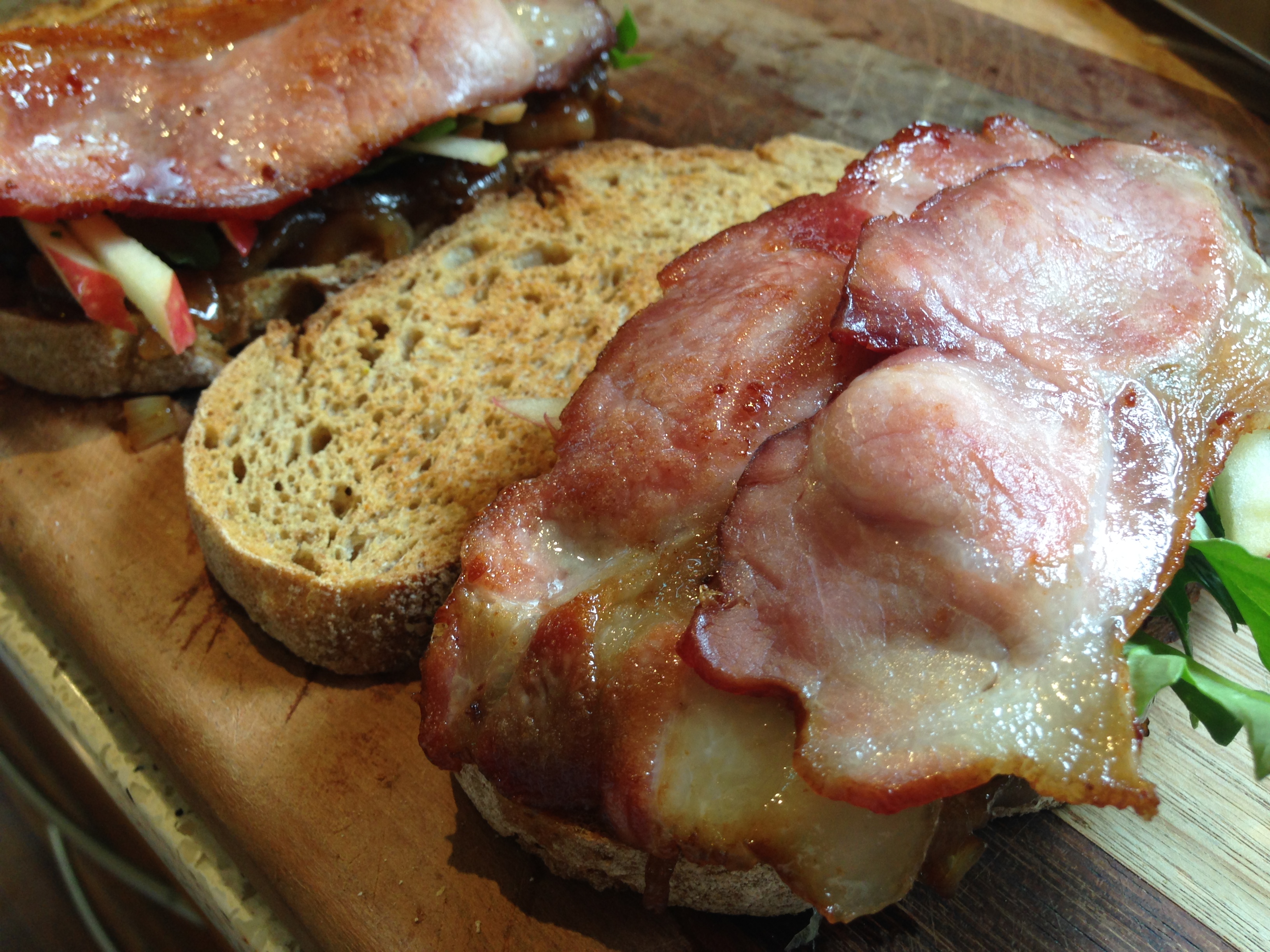 And then the egg. 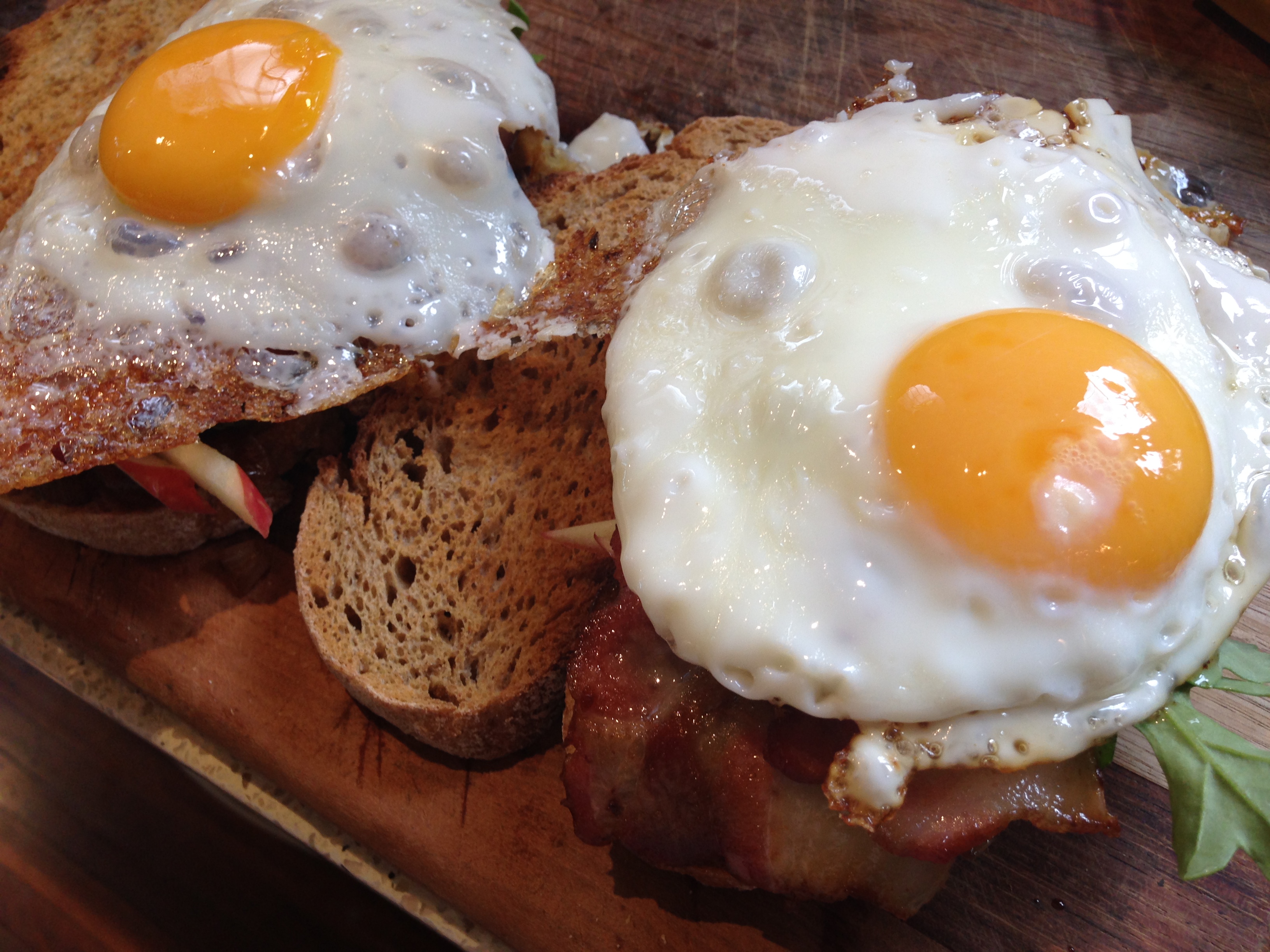 A sprinkle of salt and pepper, pop the lid on and it’s ready to eat!

5 thoughts on “Bacon and Egg Sandwich with Caramelised Onion”