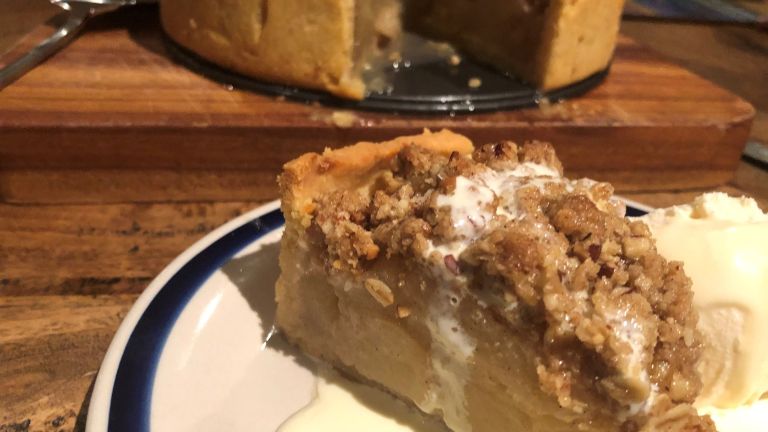 Good apple pies are a considerable part of our domestic happiness.

I love a good pie, but pies from scratch can take hours. This recipe is a cheat’s version of an apple pie, but it’s so yummy you won’t notice.

We’re in lockdown right now, so making pies seems like the right thing to do. I love a good pie. I also love a good crumble or cobbler. This easy recipe combines both. You have a pie base, an apple filling and a deliciously buttery and nutty crumble topping.

If you already have a pie crust you can throw this recipe together in a few minutes, because it uses canned pie apple for the filling. You can also use my super easy pastry recipe here, or use store-bought shortcrust pastry and have a crust made in no time.

If you’re feeling super lazy, omit the crust and just chuck the apple mix in a casserole dish with the crumble on top.

Do let the pie sit for at least ten minutes after you take it out of the oven so that the filling firms up and cuts nicely for you rather than sploodging all over the plate.

Serve with lashings of good quality vanilla icecream and some pouring cream for a nurturing dessert. Ben also recommends it as a breakfast pie with a big dollop of yoghurt, because apparently fruit and yoghurt is breakfast food every day of the week! 😊

Lots of love, and a sprinkle of cinnamon and spice, Nicole xx

Ingredients for the pie

Ingredients for the crumble

One thought on “Apple Crumble Pie Recipe – Easy and Quick”