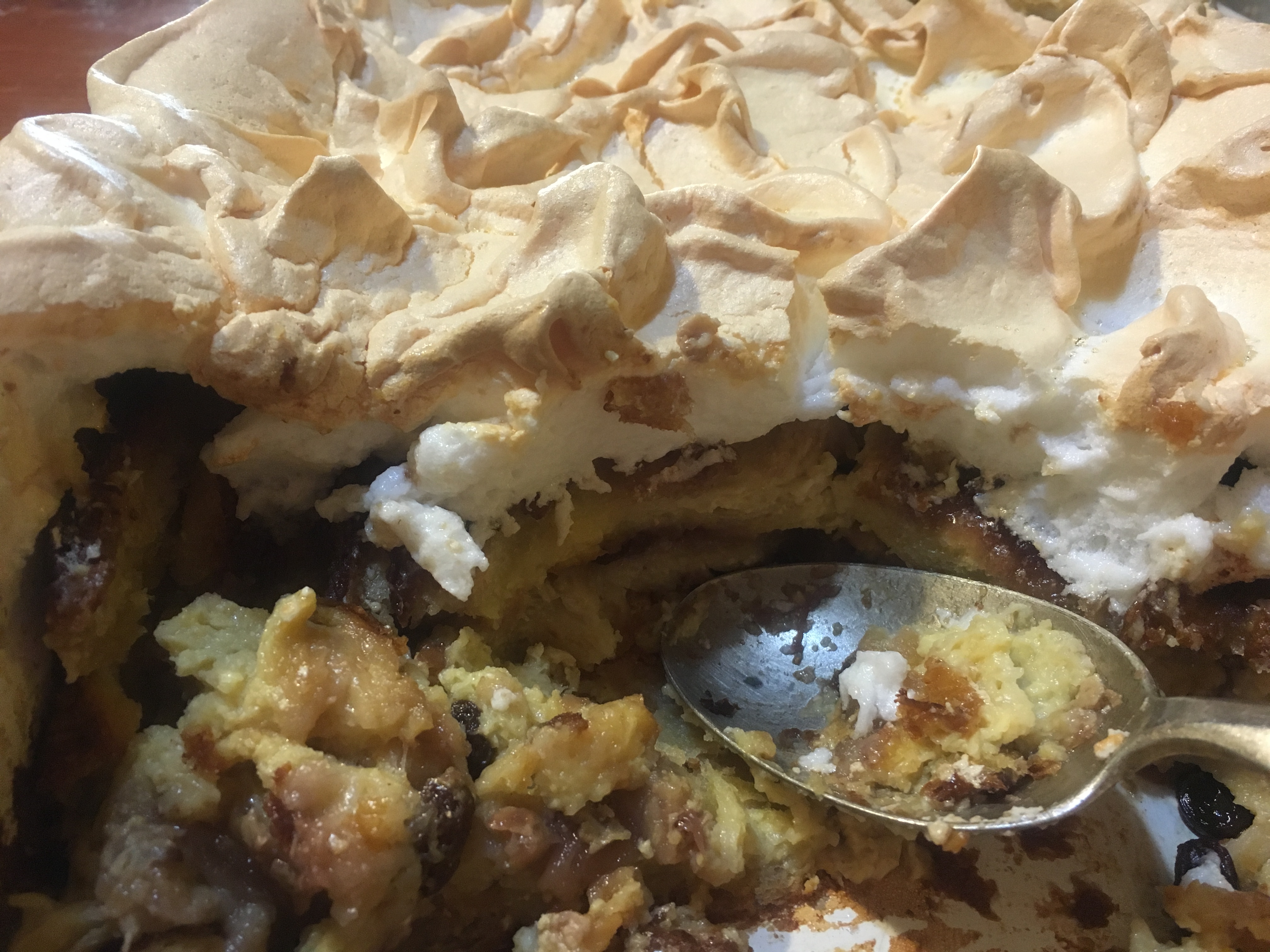 “People don’t realize how easy they have it these days. Most kids have never known what it’s like to go without anything. They want something, they get it. If there isn’t enough money, they charge it. We never wanted anything because we never realized we could have anything. We never missed what we never had. Things were much simpler back then, and we were stronger for it. We worked together to keep the house in order, to put food on the table. We kept things going.”
~ Clara Cannucciari, Clara’s Kitchen: Wisdom, Memories, and Recipes from the Great Depression

My Nana grew up during the Depression. Her father was a bank manager. When it all fell apart and he lost his job and their family home, they all moved back in with Nana’s grandparents. This pudding became their household staple for special occasions. It was fancy enough to serve when guests came for dinner, or at a birthday meal, and you could make it from staples found in your pantry. A good and economical twist on traditional bread-and-butter pudding, Queen of Puddings is topped with a luscious layer of meringue.

My beautiful Nana would often whip us up one of these puddings when we went to stay with her overnight. I think I liked the name of this dish as much as the pudding itself. Queen of Puddings does sound rather impressive, don’t you think?

It is easy to make, and is delicious hot or cold. Serve with ice-cream or cream for something a little special.

I often make it when neighbours pop in for dinner, or if I am feeding a crew of hungry workers.

The images in this blog post are for a double batch of pudding, just so you know 🙂 .

And here’s my beautiful Nana, who lives on in my kitchen through her recipes. I still miss her so much, but I feel her around me often. 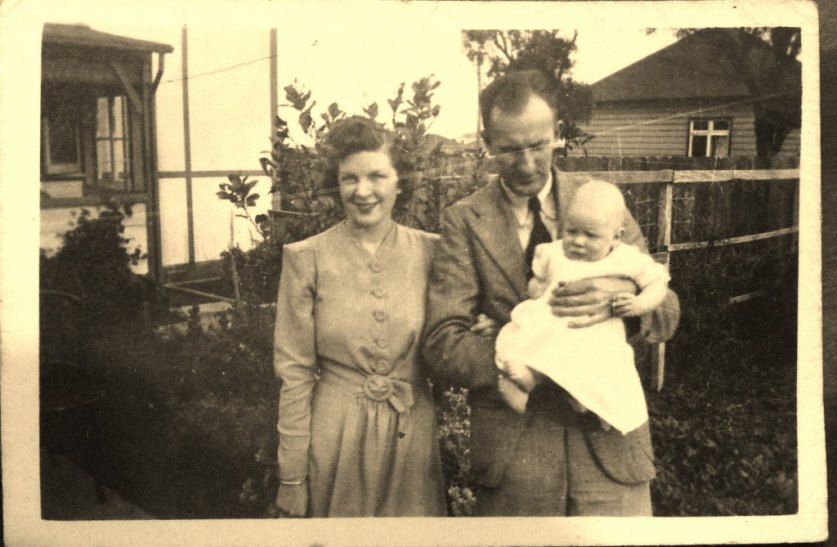 Slice croissants in half lengthways (like you were opening one out to make a sandwich), spread thinly with butter and then with jam.

Layer the croissants into a deep buttered dish, and then sprinkle with a handful of sultanas if you wish. 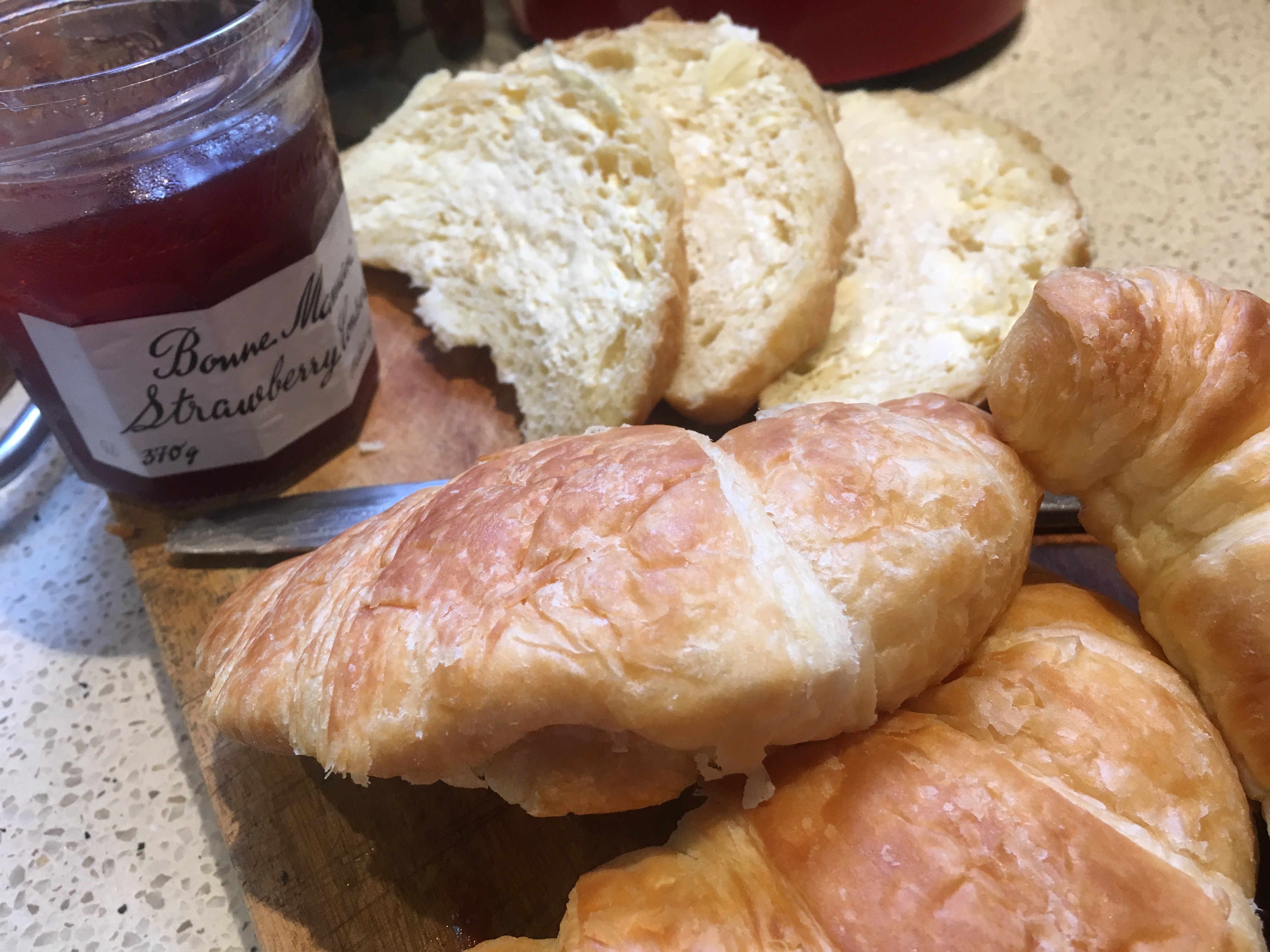 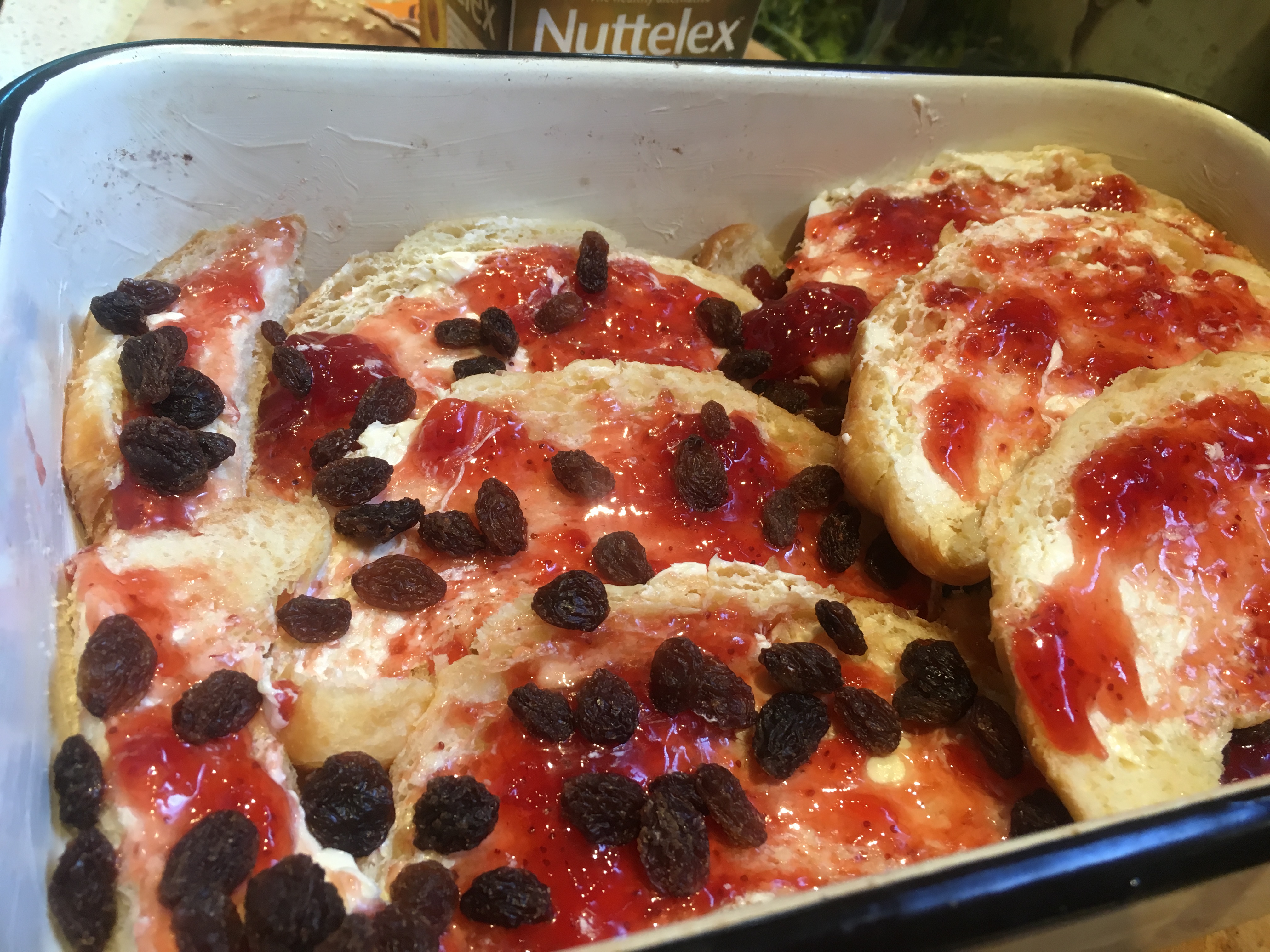 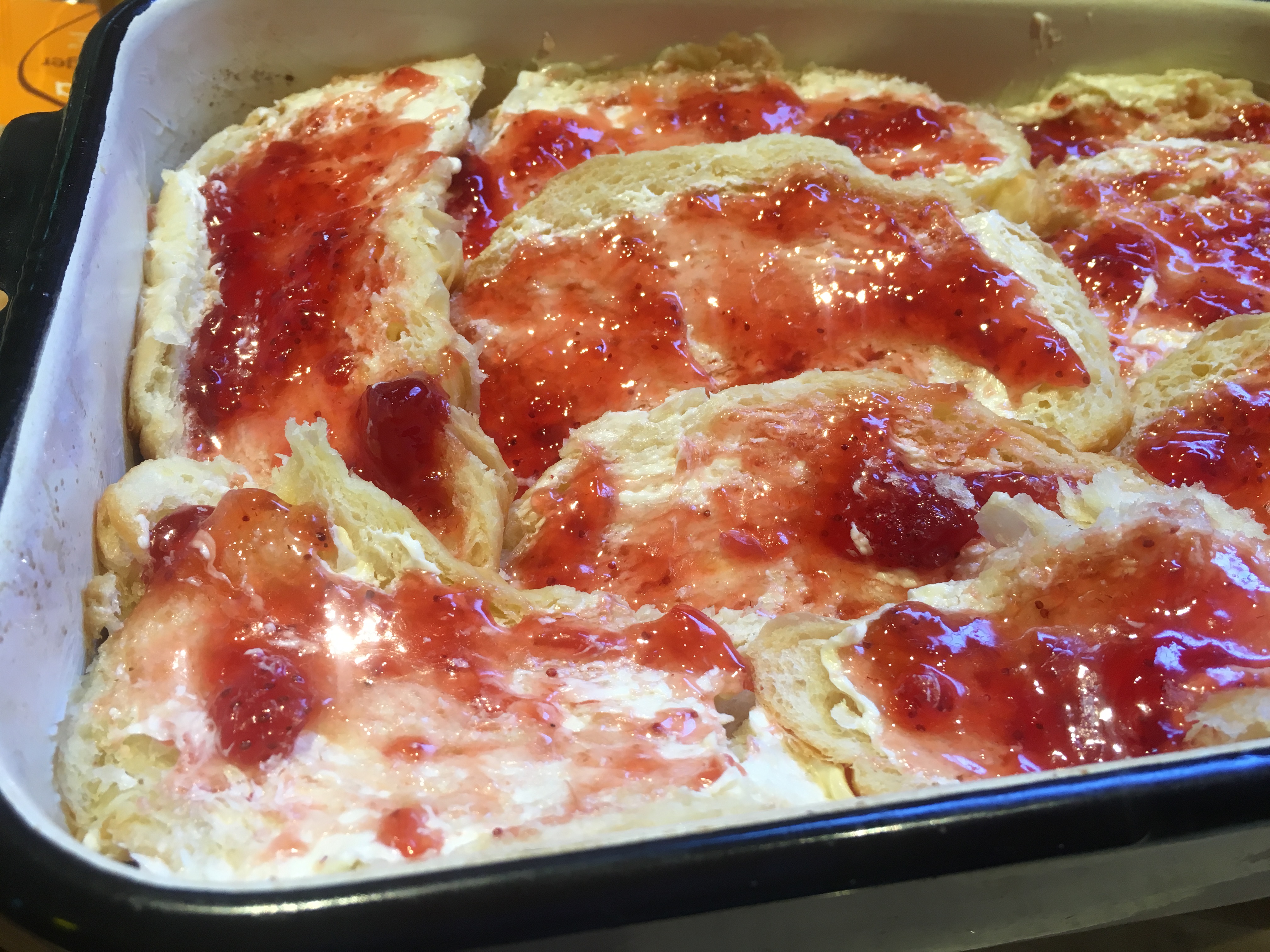 Place another layer of croissants on top, jam side up.

Whisk the milk and egg yolk together and add the vanilla. If you like, you can add a little sugar to the custard. It depends on how sweet you like your puddings.

Pour the egg mixture over the croissants and let them soak it up for ten minutes or so. Press down once or twice with a fork or the back of a spoon to make sure that all the dry pieces become moist. 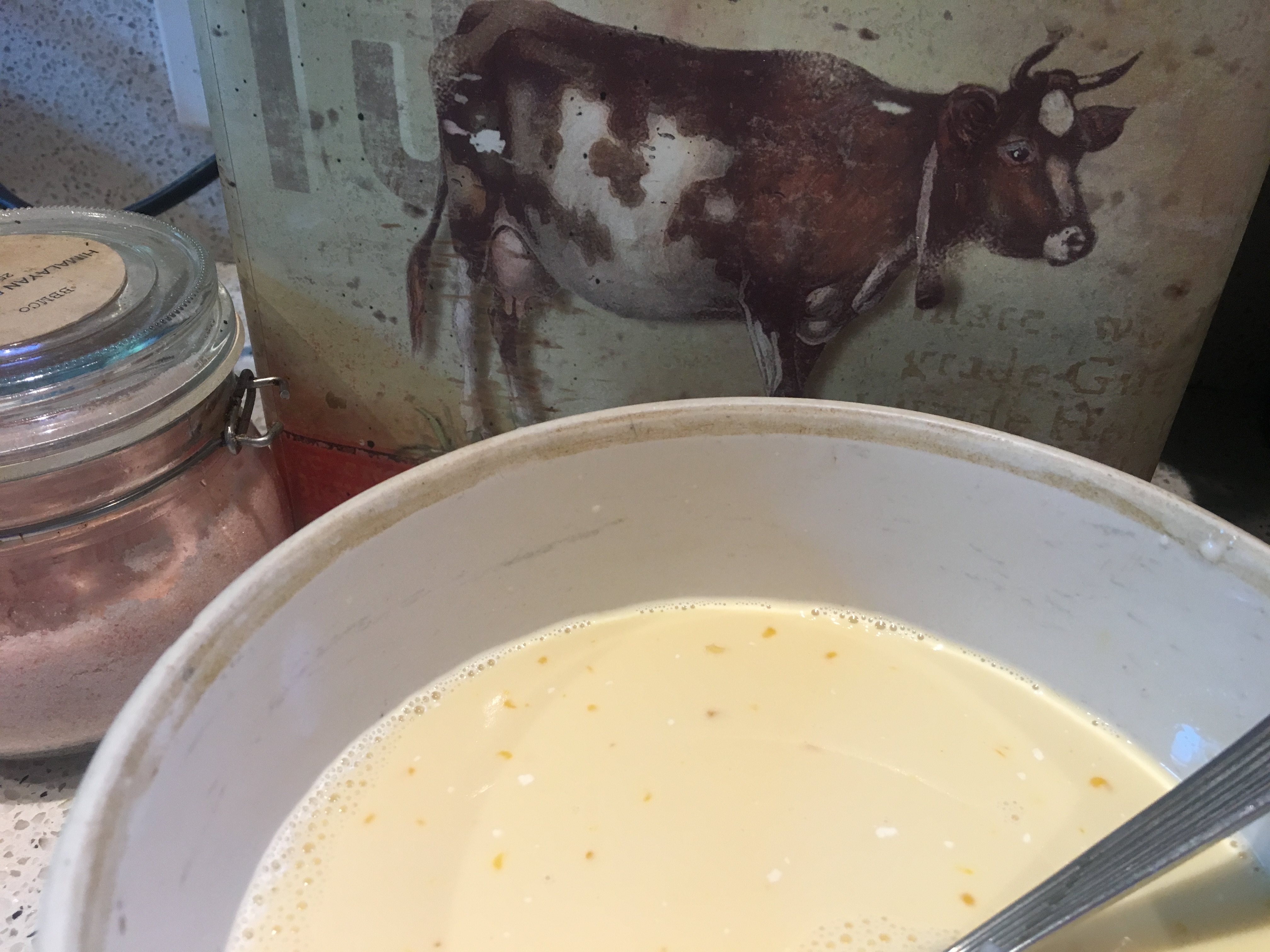 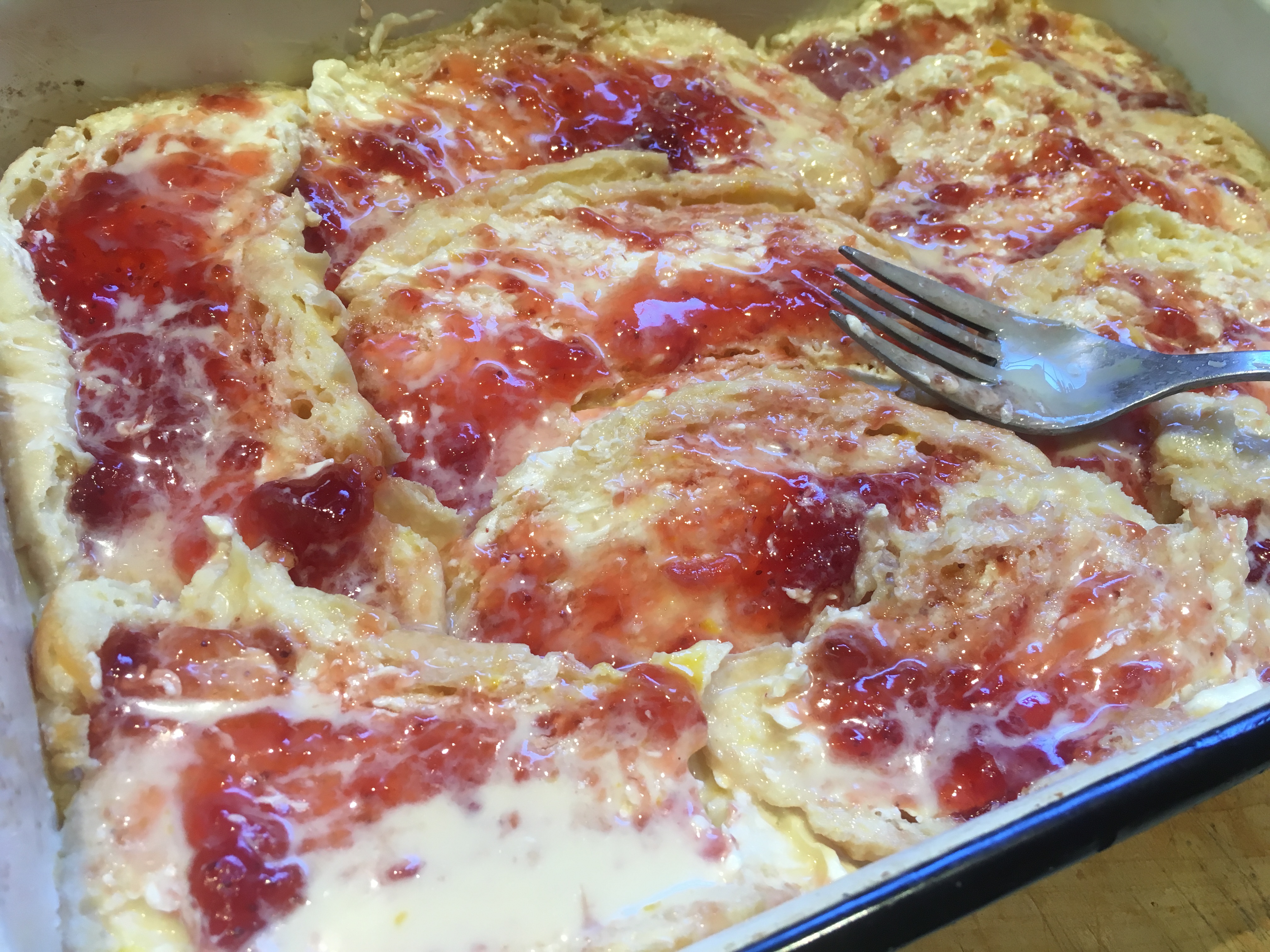 Bake the pudding for 40 minutes or until risen and golden. 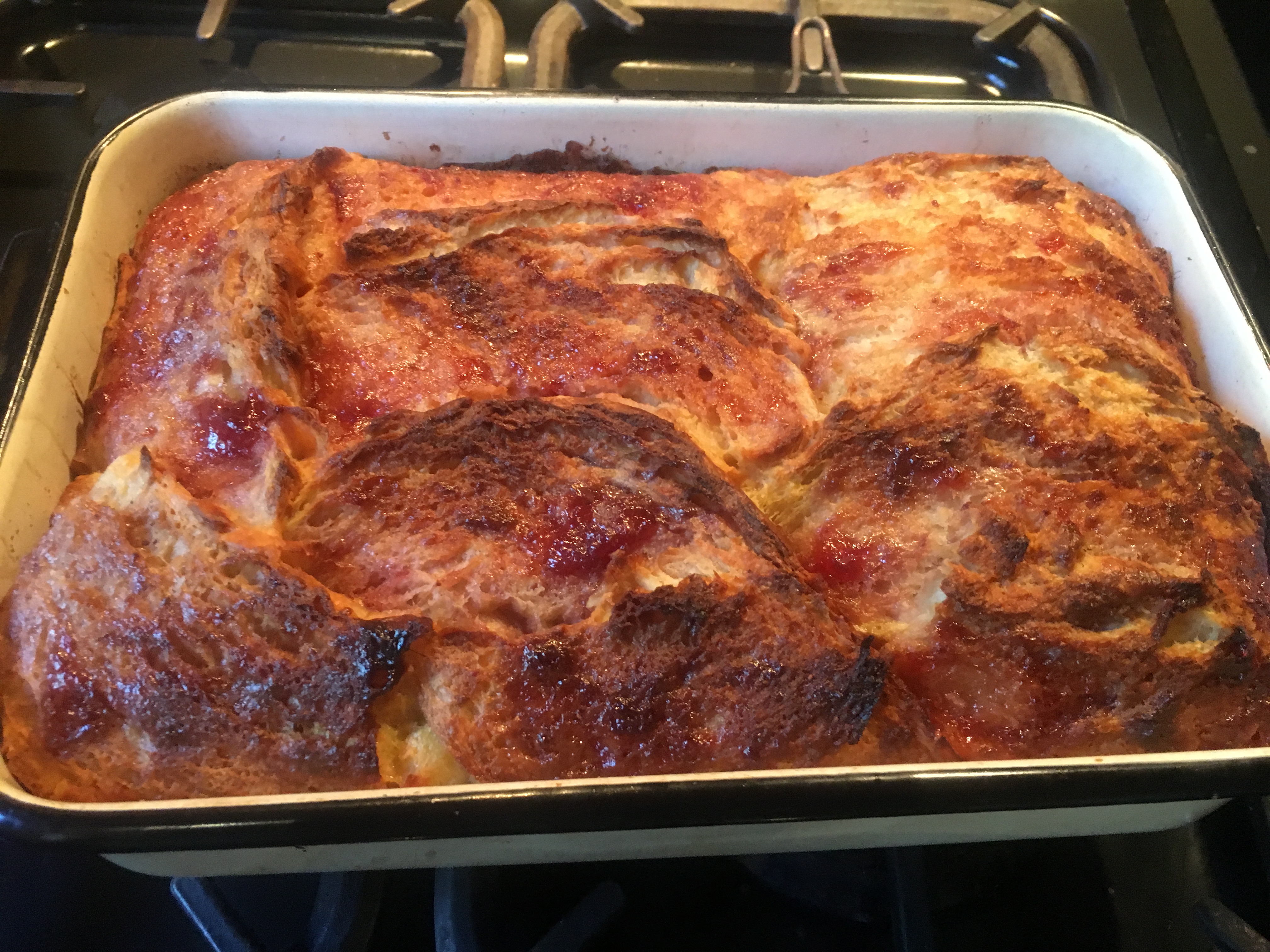 Beat the remaining sugar and egg white into a meringue. Spread over the hot pudding and then return to the oven for ten to fifteen minutes or until golden and a little crispy on top. 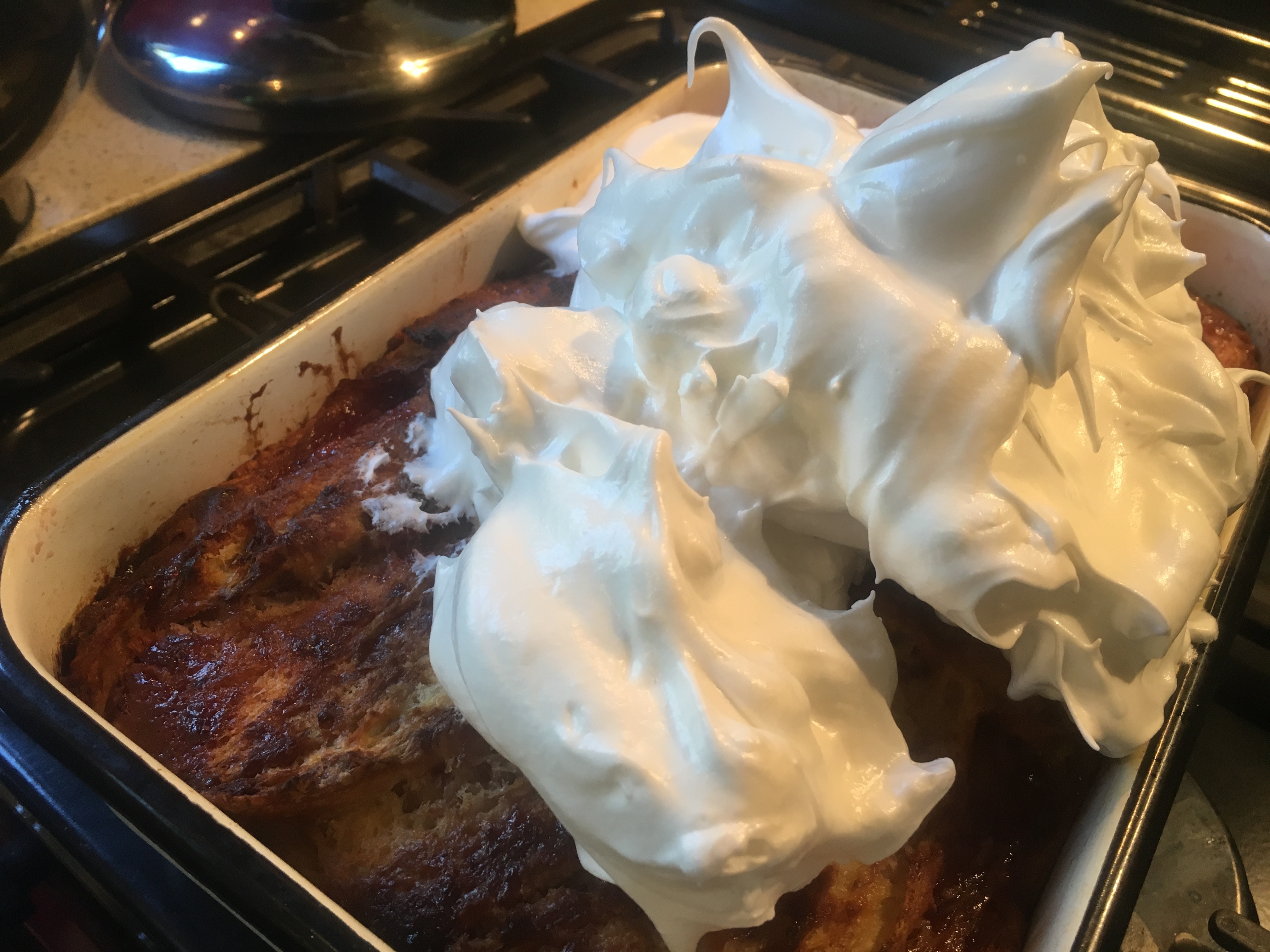 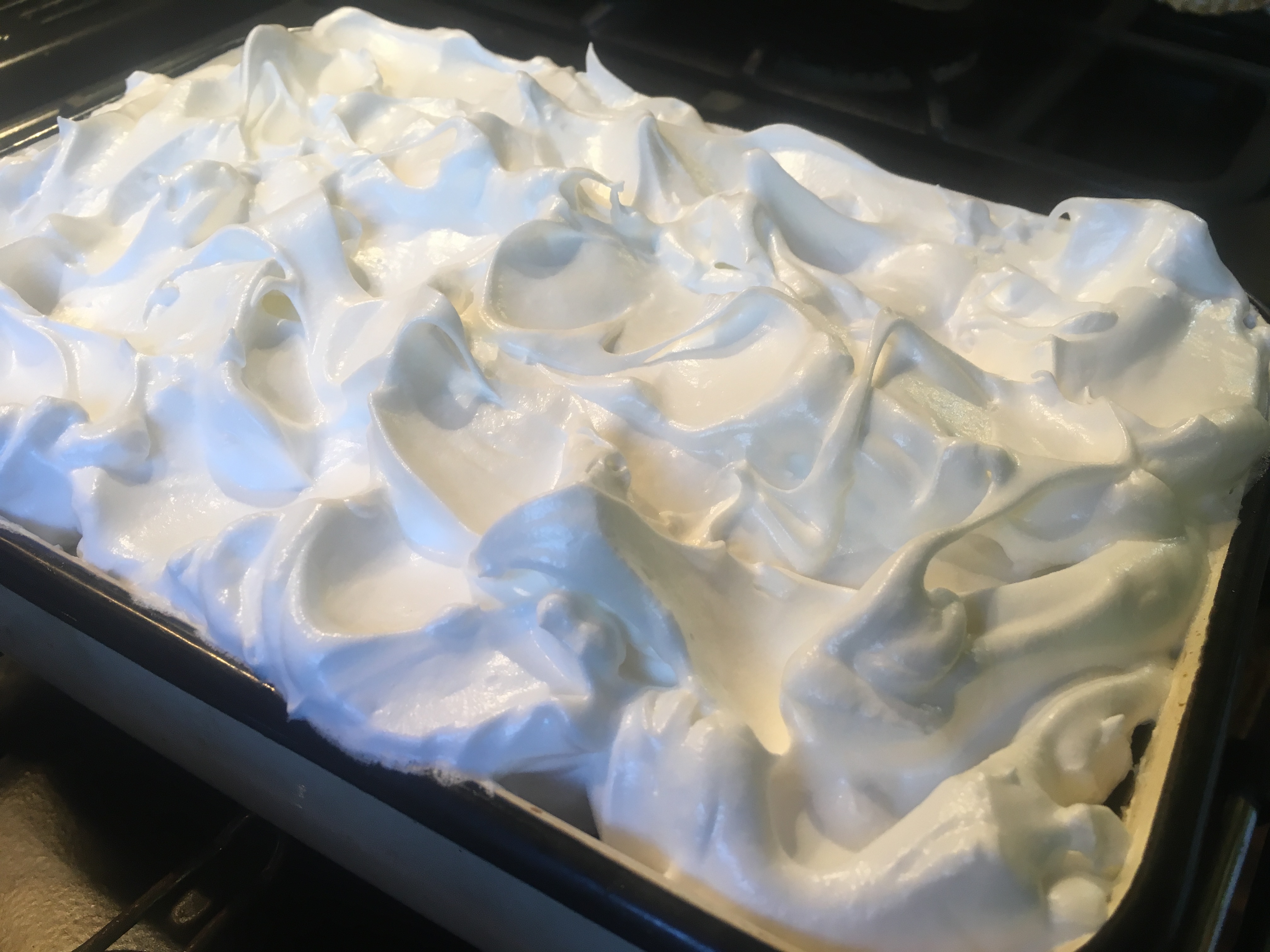 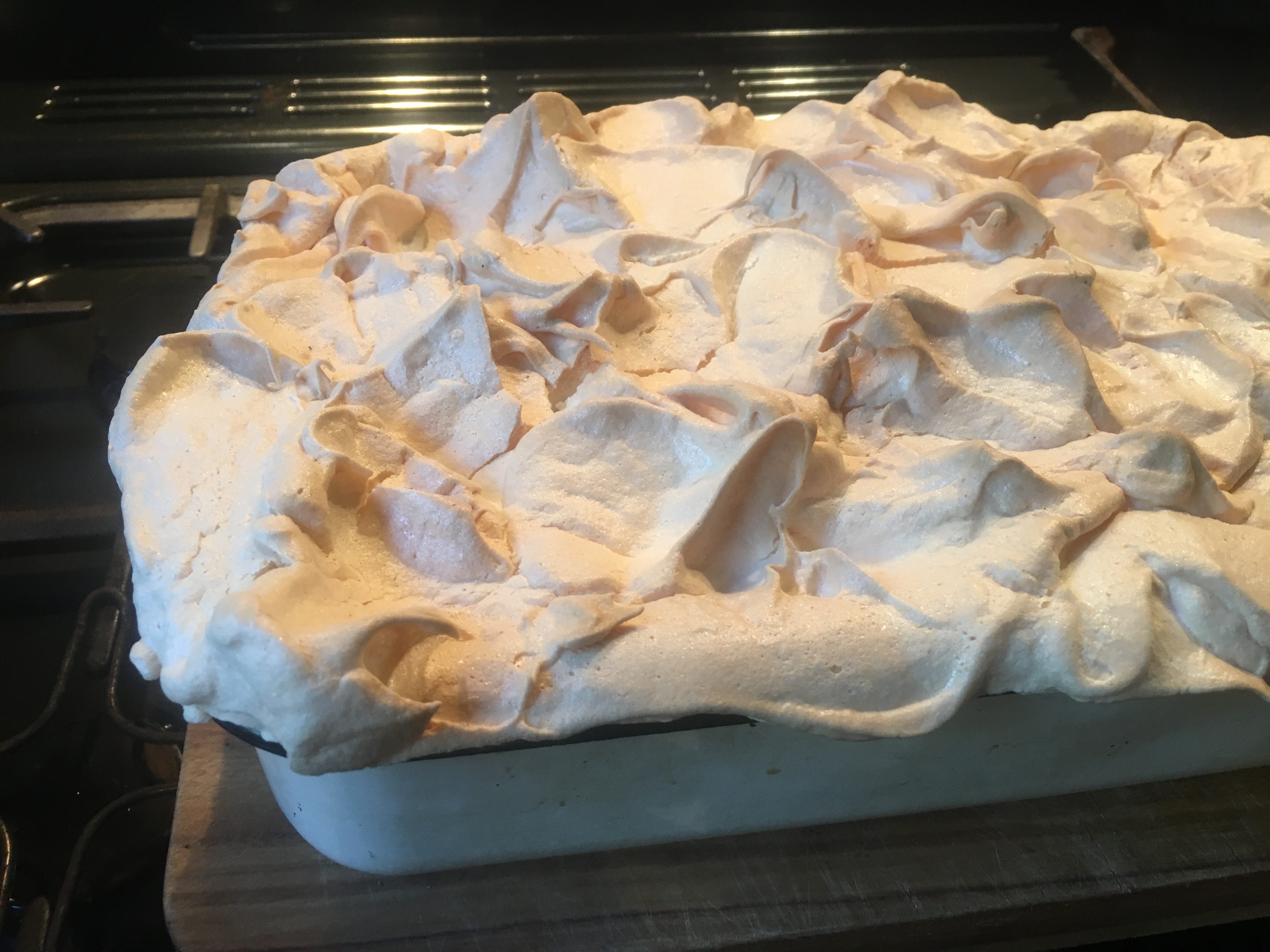 Serve on its own or with a little cream, yoghurt or icecream.

Easy, yummy and filling. Thanks, Nana! 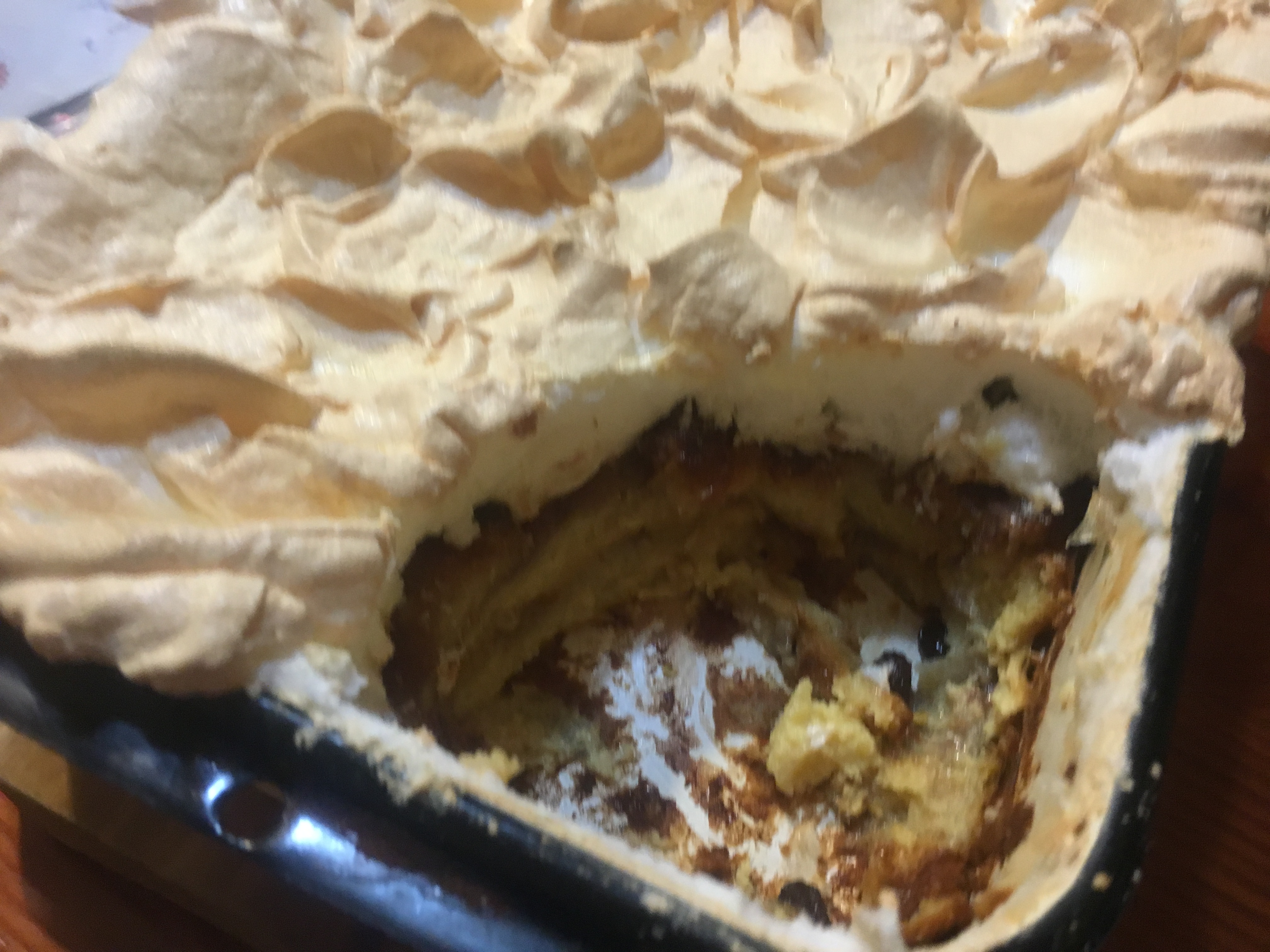 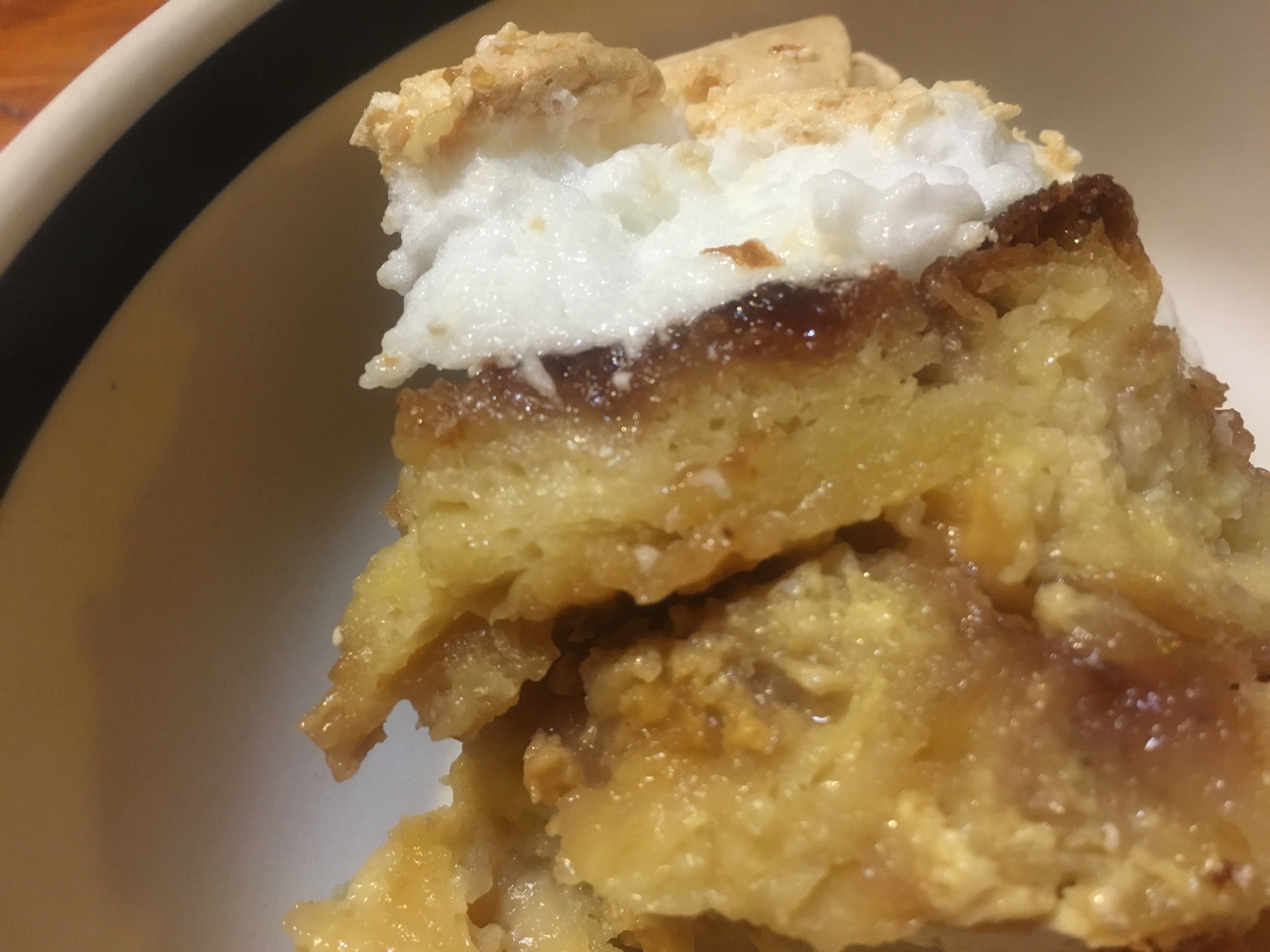 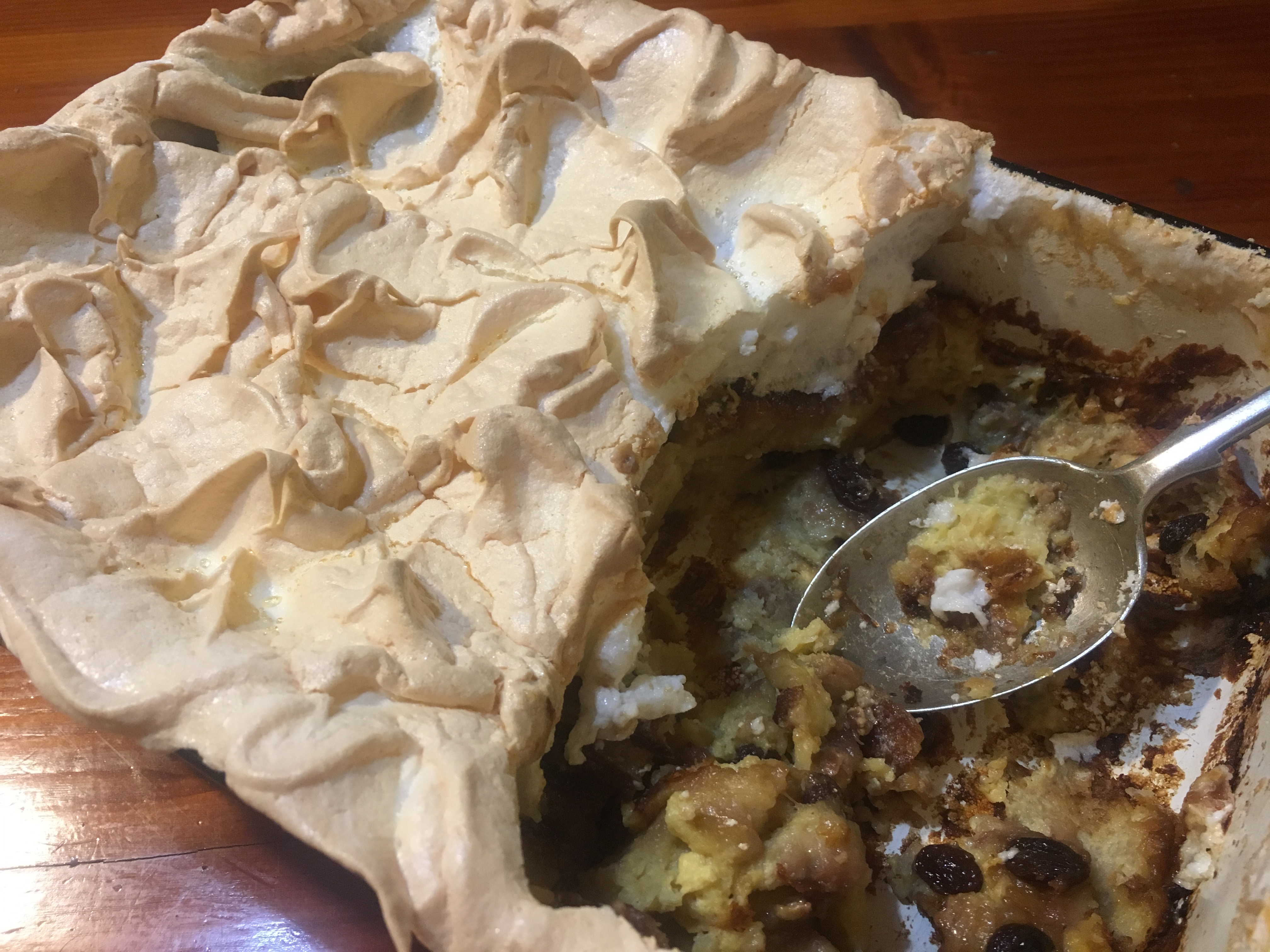 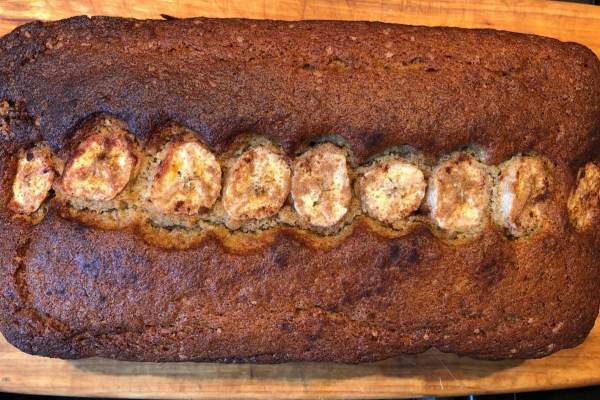 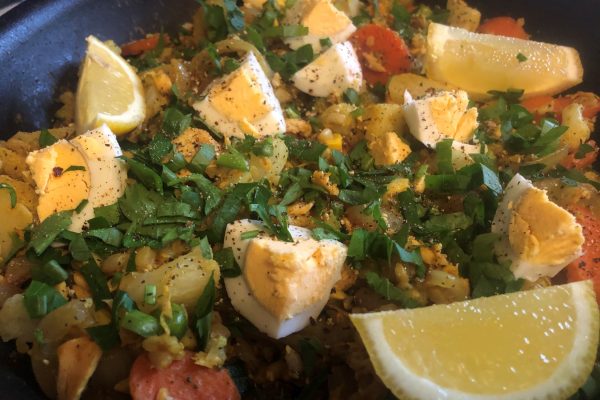