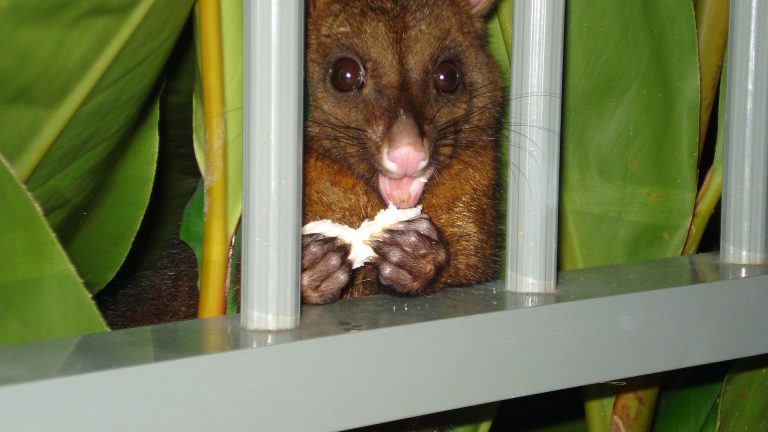 “The world is so empty if one thinks only of mountains, rivers & cities; but to know someone who thinks & feels with us, & who, though distant, is close to us in spirit, this makes the earth for us an inhabited garden.”

All through the drought we have left out food for the possums, bats, birds and other critters who share this land here at the farm.

One young possum made his nest in the fork of a tree outside my kitchen window, and we’ve been good friends ever since.

Since the recent flooding rains, and the new abundance of green growth, there has been much more food for the native animals. Mr Possum was no longer in his tree, where he would usually nap during the day. I wondered where he had gone. To be honest, I felt quite sad at his departure.

The night before last he was waiting for me on the back lawn. I said hello and left Mr Possum some mango, expecting he’d be back in his spot by morning but he wasn’t there. Then as I stood at the backdoor I heard him. He had squeezed himself on a top of a light under the eaves right above my kitchen window – a precarious spot and very uncomfortable. He made noises until I noticed him and then he sprang across into the tree where he usually lives.

After jumping around, making a lot of noise, he lept back over to his spot on top of the light fitting.

When Ben and I inspected the possum tree more closely we saw that a huge branch had blown down in the wind, and was hanging suspended immediately above Mr Possum’s bedroom. One gust of wind and that branch would have come smashing down, squashing our poor friend! Ben climbed up and managed to free the branch, which fell safely to the ground with no casualties.

This morning Mr Possum is back in his own bed again.

Sometimes, you just need a little help from your friends.

Hi! I'm Nicole Cody. I am a writer, psychic, metaphysical teacher and organic farmer. I love to read, cook, walk on the beach, dance in the rain and grow things. Sometimes, to entertain my cows, I dance in my gumboots. Gumboot dancing is very under-rated.
Posts created 2799

5 thoughts on “A Sense of Community”