“Beyond the edge of the world there’s a space where emptiness and substance neatly overlap, where past and future form a continuous, endless loop. And, hovering about, there are signs no one has ever read, chords no one has ever heard.”
~ Haruki Murakami, Kafka on the Shore

This week I am enjoying some precious days at our farm, between rounds of city doctors and their clinical offices and dry predictions.

When you can’t see, you interface differently with the world. Right now my world is not one of darkness, but rather of indistinction. Everything is blurred, and there is not a crisp edge or a sharp detail to be found. Instead I find that clarity and meaning are coming in other ways. My senses are heightened. My awareness is crystal. Where once I saw, now I listen or turn my eyes inward. I let my soul see what my eyes cannot.

There is a large jacaranda tree in bloom to one side of the farmhouse. The tree is a favourite haunt of birds, and there is one huge limb that runs parallel to the ground. This week as I have sat quietly on my verandah a number of birds have come to visit me – strolling up and down that long limb as performers on a stage.

First came Madam Crow. I know this old bird well. She and her mate have a large platform of sticks at the back of the orchard and they return year after year to raise a new season of offspring.

She strode the tree branch, clicking and calling, regal in both her manner and mood. In some ways Madam Crow reminded me of a Shakespearian actor, aware of my presence and playing to me, but at the same time lost in her own world.

She preened herself and kept me company. Later that day Ben found two feathers on the ground underneath where she had sat. I knew that I was a custodian of these feathers, and that they had Crow Magic to them.

Over the coming days more birds walked that bough stage. There was a Magpie who came back again and again to that branch. She too gave a gift of feathers.

There were multitudes of Finches, Honeyeaters and Tree Creepers. A fat Wompoo Pigeon. A usually elusive Catbird.

My hoard of feathers grew. I began to feel the messages from each animal, and how to best create some talismans to hold the energy of each message.

Finally I went to the front room and choose some waxed thread, some crystals, and some wooden beads. I chose them based on their energy – their feeling in my hands. 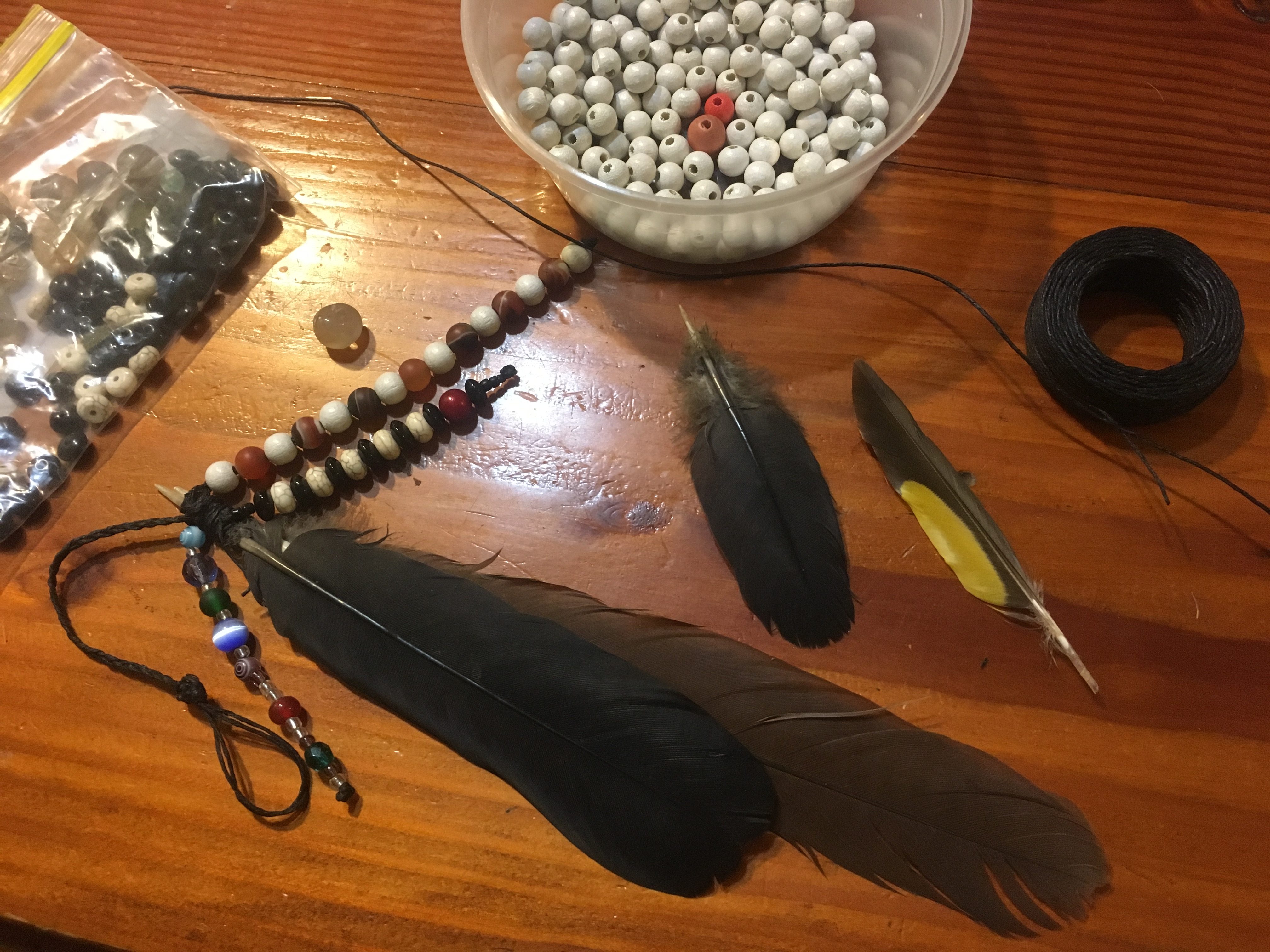 My fingers know how to wrap and knot and bead. I don’t need to see what I am doing. This is something I have done for so long that my hands can find their own way.

Taking the first two feathers – one of Crow and one of Magpie – I made a beaded feather talisman. As I worked I sang the message from the birds into the stones and wood, into the binding thread, into the feathers. I felt the energy build and lock.

The finished piece rippled energy out into the world. 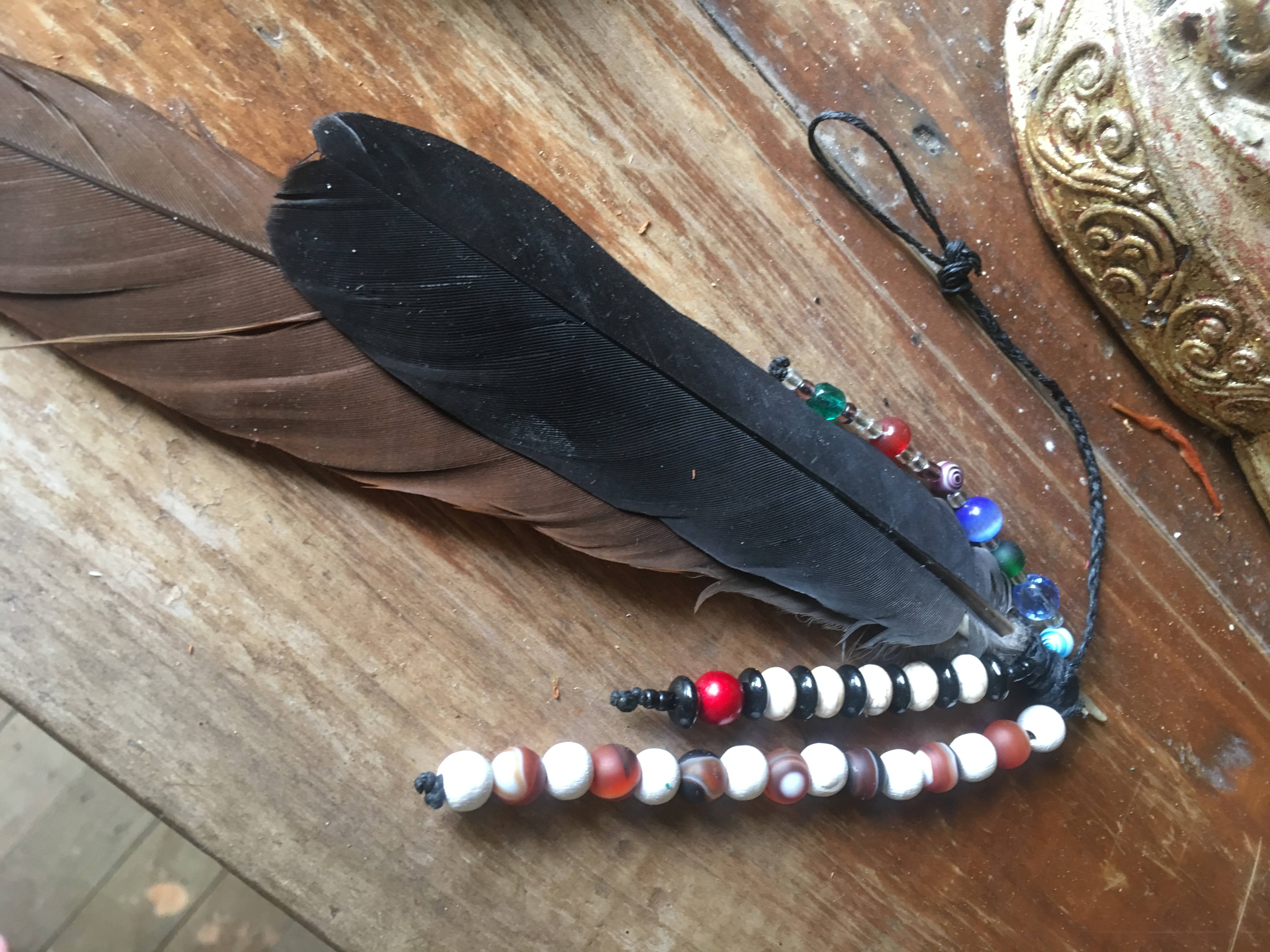 This first one was a Writing Talisman – an encouragement for someone to share their personal story. An entreatment to go deeper, to be brave in sharing truth, at gifting this story in a way that might illuminate the way for others. The feathers are supported by banded red and black agate, bone, marble, black tourmaline, rosewood and a few chakra stones that support communication and flow of words.

As I held the talisman a friend came into my head. I knew it was for her.

Just five minutes later she sent me a text asking if I was free to chat. She called me. In the course of our conversation she mentioned that out of the blue she had been thinking about her memoir today. She’d found some new ideas and a way forward.

So, dear Carly, I’m bringing this to the city for you. I know it will weave a magic into your words. I know that it will help.

Ganesha has held this in his hand yesterday and today. It is charged up and ready for you. It feels wonderful. It feels like home. 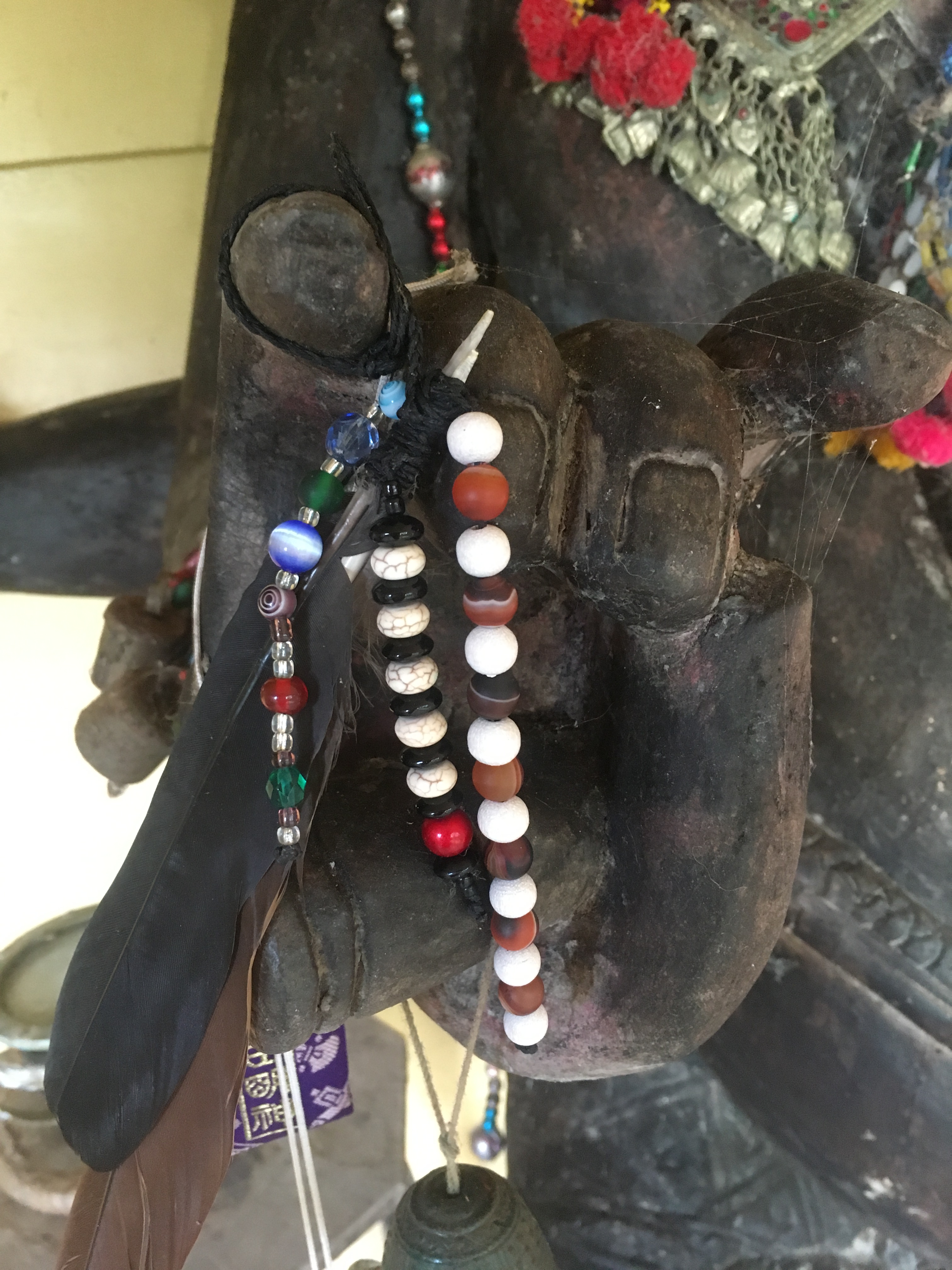 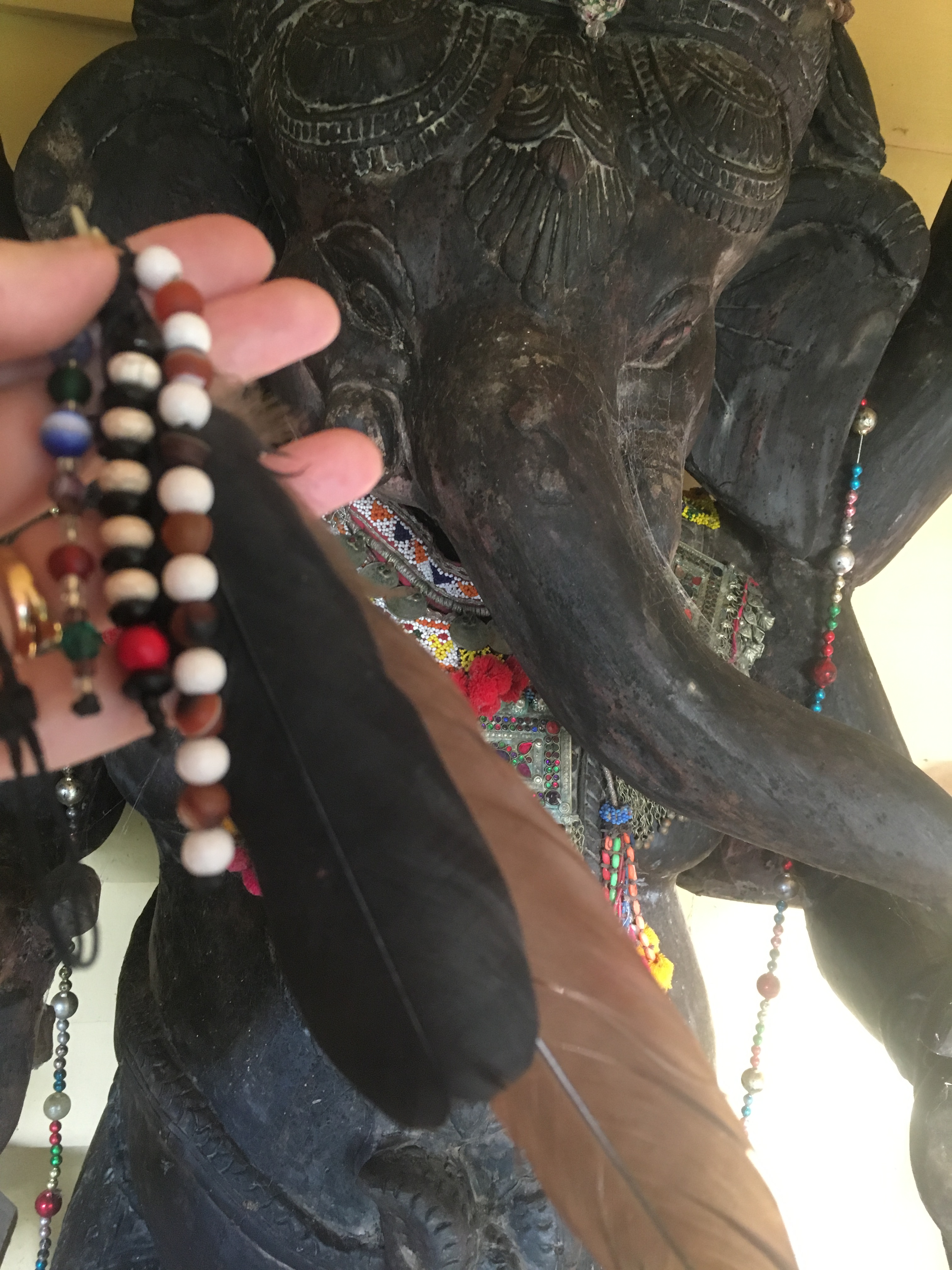 I still have a clutch of feathers, and I have begun my second talisman. I know that it is meant to go to one of you, dear readers and friends.

I’ll be giving it away next week.

I’ll let you know more soon about what it is for. I trust that it will find its way to whomever needs it most.

Much love to you, 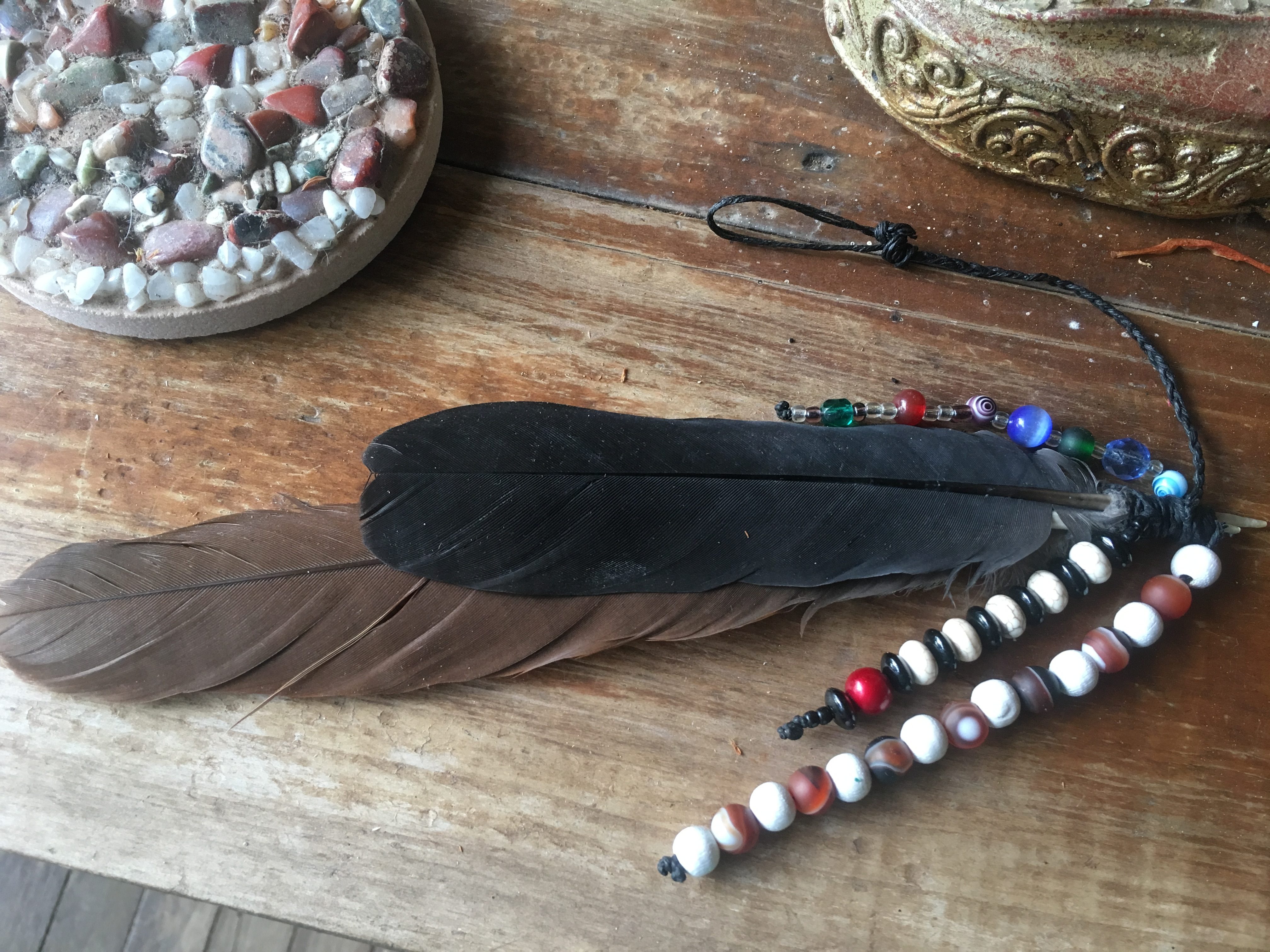 21 thoughts on “Feathers for a Friend” 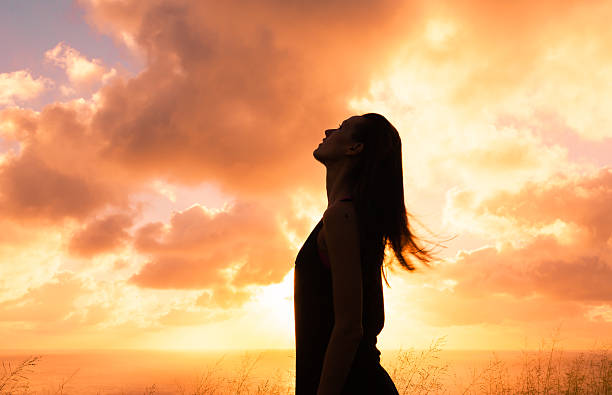 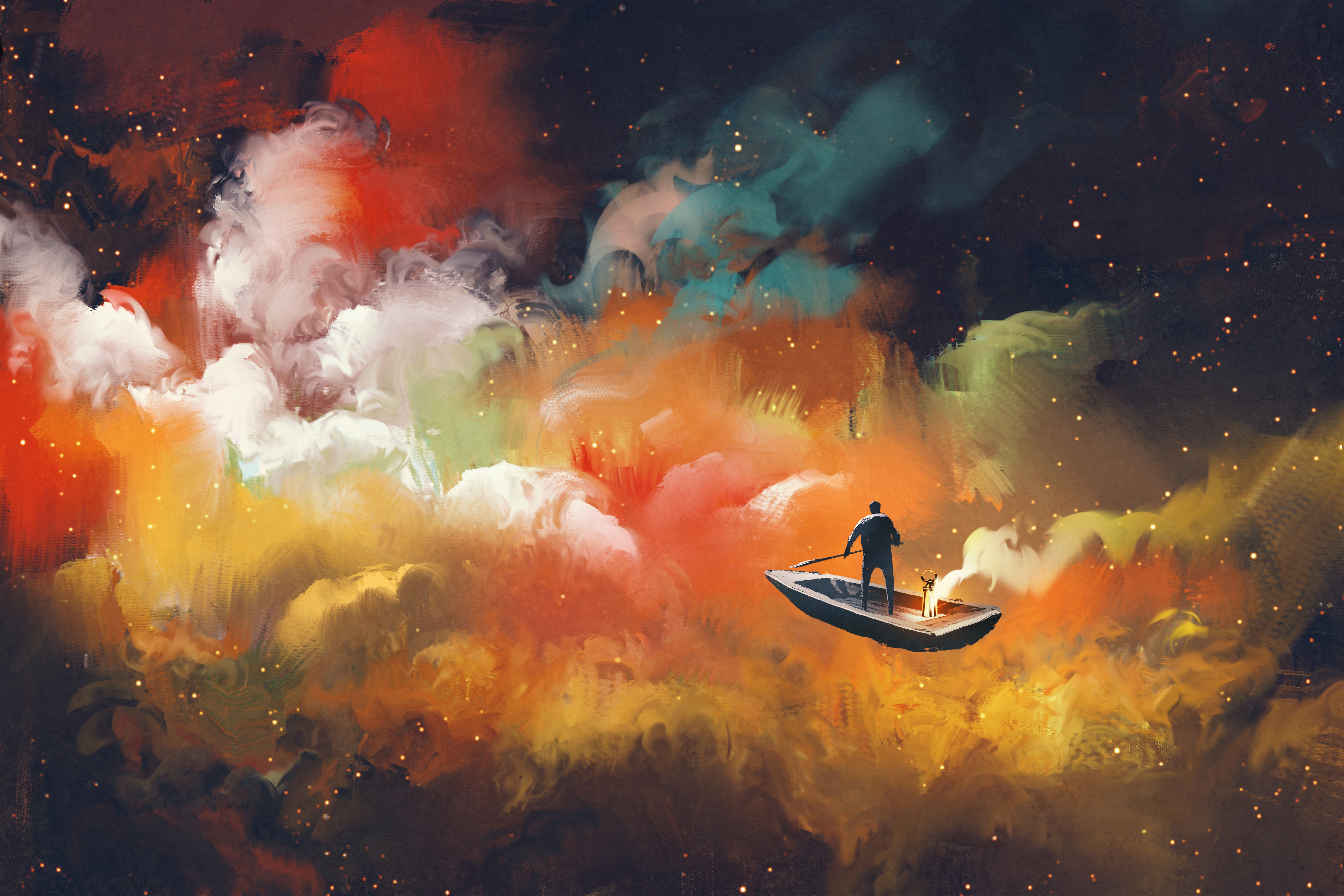