“I am not a teacher, but an awakener.”
~ Robert Frost

And when we finally met she promised me that she would take me flying again. In turn I had promised her that I would visit her in her country – the land to the north of us.

But I never went.

And she never came back to my dreams. Instead she sent others to the Station to check on my progress. Little Auntie and Grandmother, two other Aboriginal Elders came to visit me. I fed them sweet tea and cake. They helped me to feel the connection to my ancestors, and they awakened the energy in my hands.

Which was fine. But they went home, life went on, and I was still stuck in this agonising limbo of spiritual awakening where I felt less like my old self each day, and more and more a stranger in my own skin. I had not a single soul with whom to share my journey. No benchmarks for what was normal, no-one to ask for help or to help me understand what was going on as my psychic skills lurched from one level to another.

I was struggling, out there on my million acre cattle property in the remote Australian Outback. I was desolate with loneliness, and the strangest sadness. No matter how hard I worked, no matter how I filled my days, there was an emptiness inside me that nothing seemed to fill.

My nights were crowded with crazy dreams, snippets of things I knew I should understand, things I DID understand in the dream state, but that left me bereft and confused each time I woke.

I began to withdraw from the handful of people I lived and worked with, and spent my spare time gazing out over the river or the flats. Each night I watched the fire, went for walks to count shooting stars, and waited for my owls to visit.

And then one day a little bird turned up. It was a tiny bird; a type of wren with an upright blue tail, a duff coloured crown and tiny splashes of chestnut around the eyes. I had never seen another bird like it.

It flitted from branch to branch outside the dining room, and when I walked back to my office after lunch it followed me to the door, chirruping and singing and click-click-clicking away.

It was there again in the afternoon. And somehow when I saw that little bird, I felt less alone.

The little bird followed me for two weeks. It even flew into my quarters one morning and sat on the railing at the end of my bed, all bright-eyed energy and curiosity.

That tiny bird came to mean something special to me, and I looked for it every day.

So, of course on the morning that it did not turn up I worried. Where had it gone? Was it okay?

As the day progressed I became more anxious. Perhaps you could even say I felt depressed. And then, in my head, I began to hear wailing.

At first one voice, this high keening sorrowful sound. It was so real that I actually looked to see where it was coming from. But I was all alone in my office, with the hum of the air-conditioner. Outside in the dry heat I could hear the helicopter, braying cattle, a motor bike, the sound of banging in the workshop and of mens’ voices. I could still hear the wailing, but I couldn’t tell you what direction the sound came from.

By nightfall I could hear more voices, all keening and wailing in the most melancholy of manners. No one else could hear anything.

I don’t remember falling asleep. But I do remember peeling back from my sleeping form and looking down on myself in the bed, hair fanned out around the pillow, and my long limbs all tangled in the sheets. I felt such love for my other self, lying down there on the bed. I saw my pain and confusion and loneliness as if they were the emotions of someone else, and I understood that it was all transitory, and attached to that life I was immersed in, rather than to my soul. This, THIS was my soul – this joyous free being floating near the ceiling of the room.

As I flew I could hear the breathing of the animals, and the thoughts of the trees. And like I was tuned in to some strange compass I kept flying northwards.

I could still hear the wailing, but now it sounded like silver light rippling along the dark face of the earth. I could hear the individual voices, I could hear the ancestors’ voices contained in the voices of their children’s children. It was a song as old as time, a linking song that ties our souls to all that ever was.

It was the saddest lament. It was a song of goodbye, a release of pain. It was a staircase made of sound.

The little sparks of souls illuminated the night. I could see every one, lighting up the darkness like the nightscape of a city.

Through the soft air I flew. By myself, but connected to everything.

When I woke up back in my own bed my face was streaked with tears. My hair smelled of fragrant smoke. I hastily packed a bag, and scrawled a note.

It was just on dawn. I crept out of my room and went over to the dining room, bag slung over my shoulder.

The Aboriginal Stockman was squatting on his haunches just outside the door, mug of coffee in his hand, a thin home-made rollie cigarette dangling from his lips.

“You ready?” he grunted.

He flung the reminder of his drink into the garden, and placed the mug on a table.

Wordlessly we walked back to his ute.

But we both knew.

Little Auntie was dead. We needed to go home.

Sister, sister, watch over me. Little Auntie in the night sky… 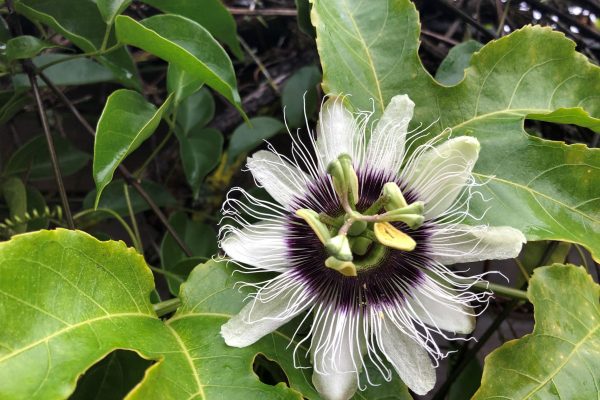