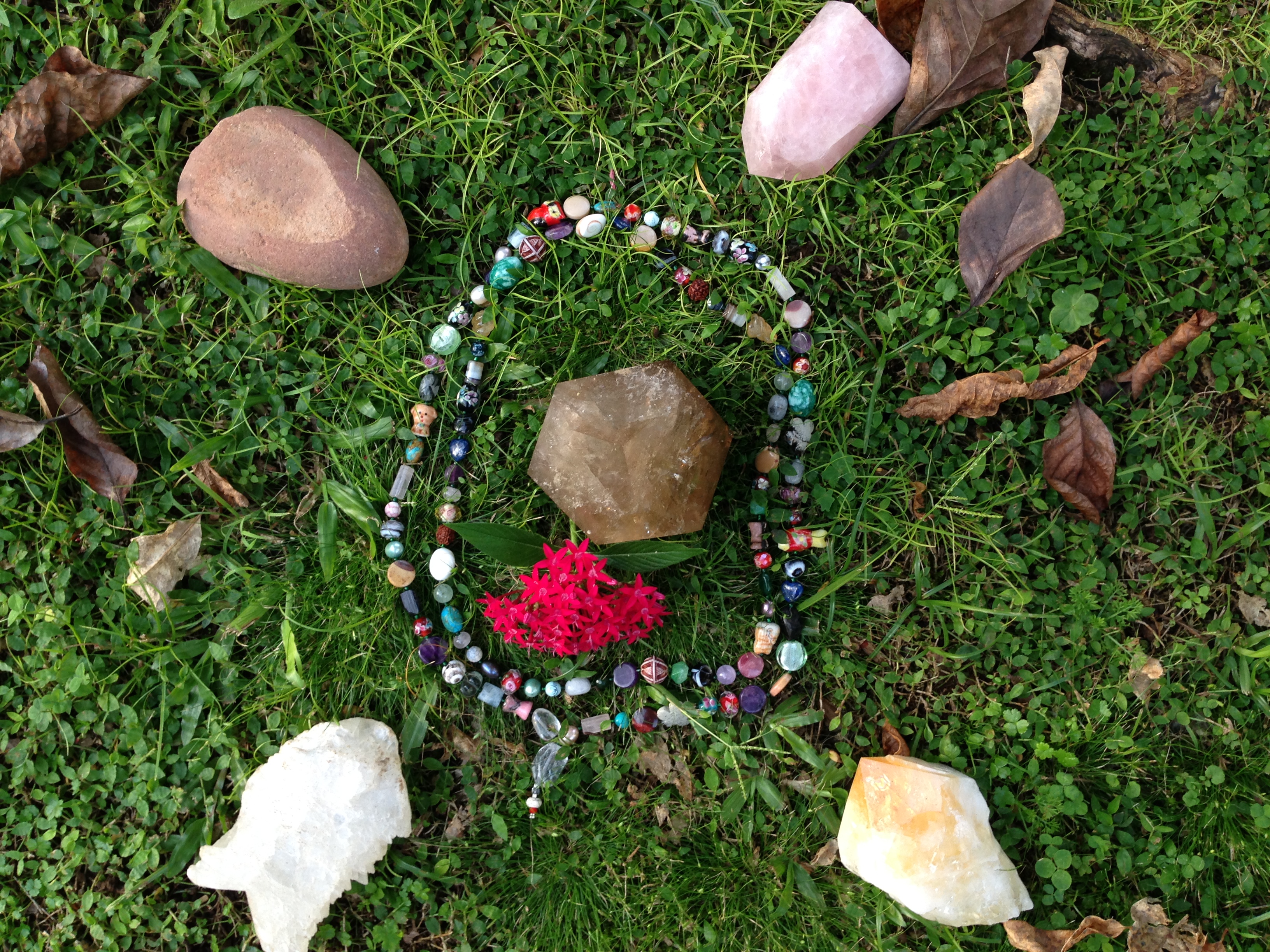 “The best teachers have showed me that things have to be done bit by bit. Nothing that means anything happens quickly–we only think it does. The motion of drawing back a bow and sending an arrow straight into a target takes only a split second, but it is a skill many years in the making. So it is with a life, anyone’s life. I may list things that might be described as my accomplishments in these few pages, but they are only shadows of the larger truth, fragments separated from the whole cycle of becoming. And if I can tell an old-time story now about a man who is walking about, waudjoset ndatlokugan, a forest lodge man, alesakamigwi udlagwedewugan, it is because I spent many years walking about myself, listening to voices that came not just from the people but from animals and trees and stones.”
~ Joseph Bruchac

Do you remember, back in February, when I decided to make a mala, and to pray every bead twice a day for a month? The idea came to me because my friend Liz was going through a difficult time, and I wanted to find a practical way to support her. My first bead – a pearl – I marked for her, and then I chose a bead for 106 other people, and the 108th as a bead to represent everyone not specifically mentioned in the previous beads. The keeper bead, at the beginning and end of the mala, is the stone I kept for myself.

My intention for that thirty days was to use my meditation and prayers to aid in your emotional support and healing. I strung each bead onto the mala with an intent for you to know forgiveness and self-love, for ending guilt, regret, fear and shame and embracing love and flow and abundance.

Each day I held every bead, one at a time between my fingers, and prayed my mantras and then a specific prayer for each bead – each person. I wore the mala every day, all day, so that I carried you with me. Soon my fingers knew each bead by name. This one Wendy, this one Jess, Jacob, Holly, David, Satisha, Kim, PJ, Joanne…

Each night when I finished my meditation I lay the mala on a large quartz and green tourmaline cluster beside my bed. Each morning my fingers reached out in the dark, found the mala, and my prayers and meditations began again. After which the mala was placed over my head so that I could wear it all day.

The very first day I wore the mala I took you all out for breakfast at a favourite cafe near my farm. Later we swam in the ocean. The water was so clear that I could see tiny fish darting above the sand below my feet. A stingray shuffled past. A dolphin greeted us from a rolling wave.

Over the next thirty days this mala came with me as I swam in rivers, watched koalas in the eucalypts, walked rainforests and paddocks, visited farmers markets and dined with friends. I felt that you were with me on every step of my daily life. You came to coffee shops to sit and write with me and my friends, you came to conferences and dinners and even to a theme park where I took you on a crazy ride and then ran in the rain. You’ve been hugged, and you’ve enjoyed laughter and quiet times. You’ve been held during the day when I sensed you needed extra support. You’ve had all kinds of weather, and you even came dancing with me at Bluesfest. 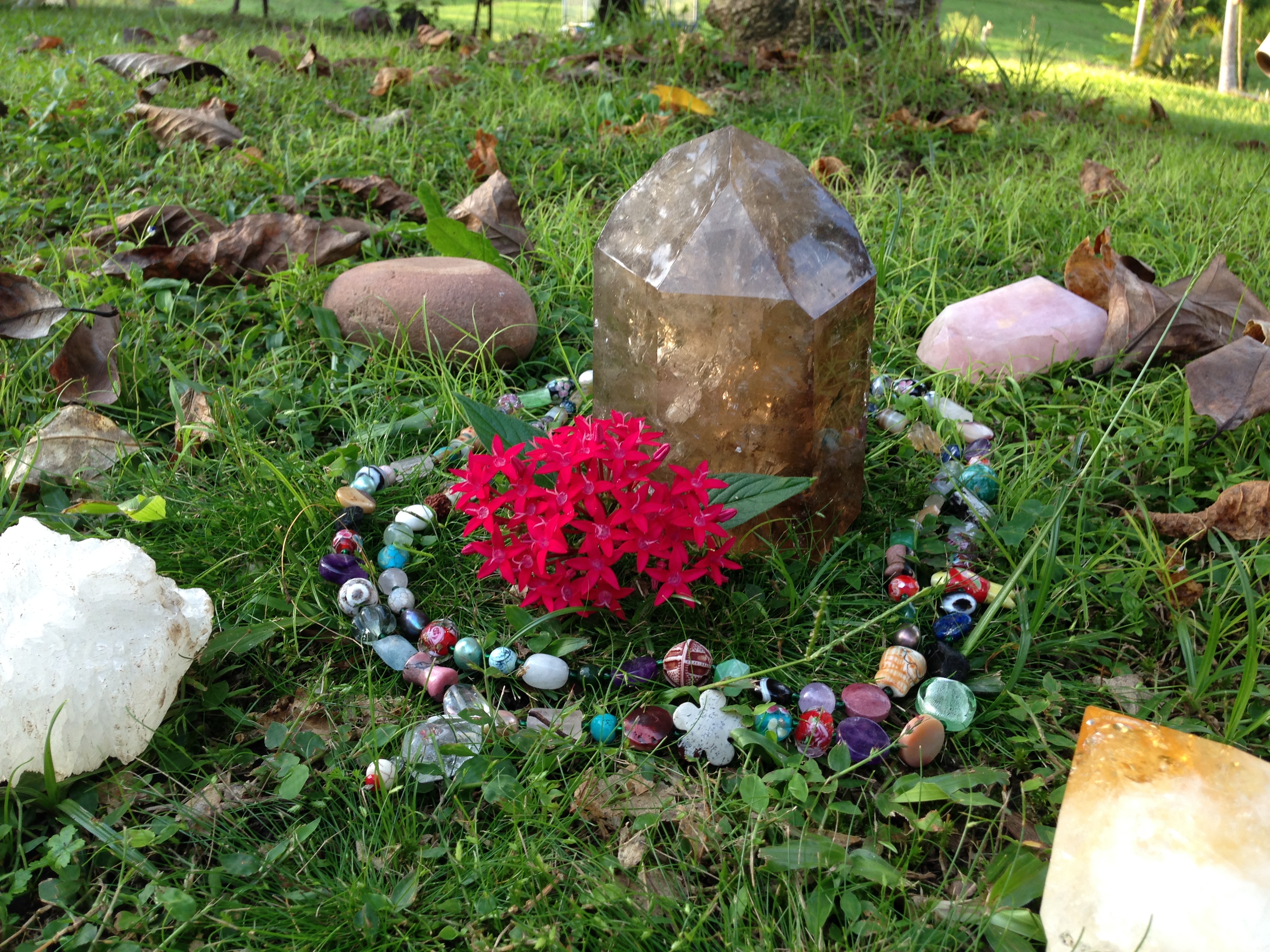 Finally on Good Friday I took the mala off and laid it on the earth here at my farm, under the shade of the magnolia tree that Sokli, my fairy friend, so loves. I placed a grid of stones around the mala. A stone given to me by my Aboriginal Auntie, a citrine point, a selenite fish-tail, and a rose quartz. In the centre of the grid I placed a large phantom smoky quartz. All of these stones gave energy to the mala as it rested on the earth during the lunar eclipse and Blood Moon on Easter Saturday.

On Friday I shall gather the beads up from the earth and begin the process of unstringing the mala and passing beads on to those people who want them now that my prayer cycle is complete.

The bead that stood for everyone? I am going to string another mala using that bead and then give it away to one of my readers. Stay tuned to find out more details once that new meditation mala is complete.

I’ll begin another Love Mala soon to pray for a group of you for thirty days. Theme as yet to be decided. I promise to update you when I start allocating the next group of names to these beads.

It has been an honour and a privilege to carry you with me. I hope you feel the love and care in these stones, and know how much you mean to me. (((HUGS))) Nicole <3 xoxo

40 thoughts on “The Glorious Journey of Our Love Mala” 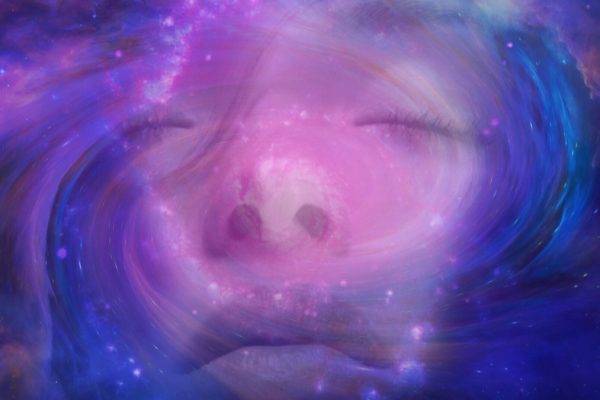